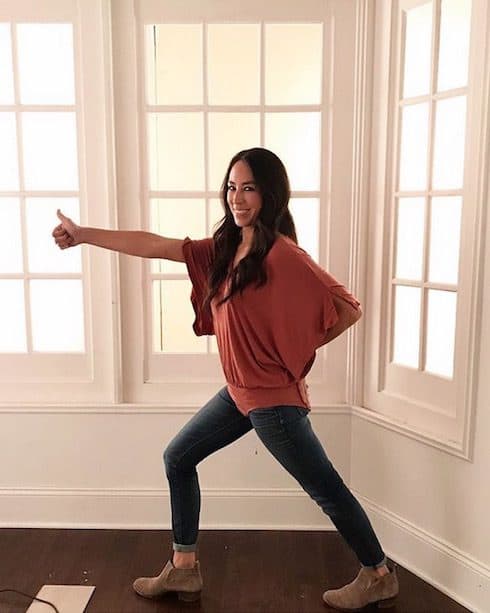 Now that Fixer Upper is airing its final episodes, Joanna Gaines is dropping more and more hints about how the show actually works. Not long ago, she gave a detailed explanation of how she stages each home the night before the big reveal, including how much of the furniture and furnishings are the family’s own and how much belong to Magnolia.

Now, thanks to a new blog post in which Joanna looks back at an amazing 2017 and forward to 2018, we have a new answer to the age-old question: Does Fixer Upper renovate every room in every single house? And, if so, why don’t they show every one of those detail-perfect renovations on the show?

Before we get into Joanna’s answer, recall that the *old* answer to this question was no, Joanna and Chip didn’t hit every single room — only the ones the homeowners deemed the most important. And, of course, the ones that fit within their budget. (HGTV pays the Gainses a talent fee of at least $30,000 per Fixer Upper, which figure is said to match the cost of their per-home labor; for a more detailed answer, check out our FAQ here.)

But that answer is no longer accurate, as the most recent Joanna Gaines blog post makes clear:

We started filming season 5 of Fixer Upper in early in 2017, and it’s going to be our biggest season ever—19 episodes! People are always asking if the other rooms of the home not shown on TV were renovated, and this season the answer is yes. For every house in season 5, the other rooms were designed and renovated along with the rest of the home. Because of time, we weren’t able to show the whole house, but that’s why we’re excited about Behind the Design. This is a bonus show that will start airing every Tuesday night after the series finale of Fixer Upper. It dives a little deeper into the design aspect and allows you to see some of the spaces you didn’t get to view during Fixer Upper.

It’s possible — if not highly likely — that the Gainses’ per-episode budget for Fixer Upper has increased over the years, which would help account for the more elaborate renovations we’ve seen so far in Season 5. It’s also possible that HGTV and High Noon Entertainment, Fixer Upper‘s production company, have tried to incorporate families with bigger budgets as well as more families eager to purchase a cheaper home for a top-to-bottom renovation, both of which we’ve seen so far during Fixer Upper Season 5.

Elsewhere in her blog post, Joanna revealed that Magnolia Table, the official Fixer Upper restaurant, is “95% done,” and set to open in early 2018.

One thing Joanna did not address: rumors that Fixer Upper itself will be back on the air in 2019, following anticipated contract negotiations by Discovery, HGTV’s new parent company.

(Photo credits: Does Fixer Upper renovate every room via Instagram)

No, William Jackson Harper is not related to Samuel L. Jackson (that he knows of)