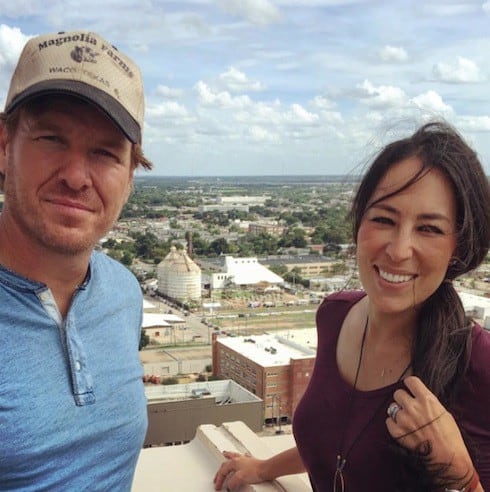 Was HGTV’s Fixer Upper canceled? Believe it or not, that is the rumor that Chip and Joanna Gaines find themselves confronted with of late, thanks to a crazy (and, it appears, baseless) rumor that somehow took hold among the show’s fans.

Before we show you what Chip himself had to say in response to this pretty crazy rumor, it’s probably worth pointing out a few things. Since Fixer Upper Season 1 premiered in 2014, the show has become one of the most popular on HGTV–if not the single most popular show on the network. Only Flip Or Flop and the occasional Property Brothers special rival it in the ratings. In addition, the Gainses are branching out into print media: The Magnolia Story, their first book, comes out in three weeks, and the official Fixer Upper magazine will see publication shortly after that.

In short, Fixer Upper and all things Chip and Jo are basically more popular than they ever have been. So we’re honestly baffled that this rumor gained any traction at all–but a blind item in God Today stated flatly that the show would not be returning to television. Things got so bad that Chipper Gaines took to Twitter to address the rumor himself:

No ma'am.. Not sure where they got this?? #justGettingStarted! https://t.co/ONuakKUL7b

yes ma'am! We are filming as we tweet! S4isComing.. https://t.co/GWnbMKQ3XU

So–there you have it, from the man himself! Was HGTV’s Fixer Upper canceled? A resounding no! And not only is Season 4 coming (#season4iscoming), but the second-annual Waco Silobration is just around the corner:

If you can’t make it down to Waco for the shindig, have no fear: we’ve got you covered with an in-depth Fixer Upper Season 4 preview right here. And, of course, reruns of the show continue to air on HGTV.

Fixer Upper Season 4 is expected to premiere later in 2016.

RELATED ARTICLES: HGTV Fixer Upper homes for rent: List of homes from the show you can stay in

Everyone rejoice: Joanna and Chipper Gaines are putting out a Fixer Upper magazine

REPORT Blac Chyna and Rob, haunted by her spousal abuse allegations, stick together despite Kardashian wishes