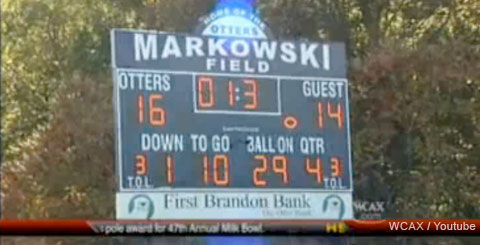 If you don’t want the dramatic build up, fast forward to the 1:30 mark:

This is one of those moments you could make a movie about! It wouldn’t be about the specific moment when Otter Valley high school football player Casey Babcock spiked a live ball, giving Mt. Mansfield the win, but the next 20 years of his life.

Unable to get away from Otter Valley, Casey (now known as Spike) lives a life of daily ridicule and harassment, spending his days working nine to five at the concrete plant, and spending his evenings replaying the game over and over again on youtube.

At this point, the movie “goes Hollywood” and Spike bumps into some super-nice, super-fine chick from out of town that doesn’t know anything about football. After realizing the crippling toll that unfortunate moment continues to take on Spike, she manages to somehow round up all the players from those Otter Valley and Mt. Mansfield teams (except ol’ Bob Hartsfield, who was killed in an unfortunate encounter with a rabid squirrel) and they replay the final seconds of the infamous game. Casey catches the missed field goal and triumphantly takes a knee before being carried off the field on everyone’s shoulders.

Oh, and of course super-nice, super-fine chick wears a vintage 2009 cheerleader outfit on the sideline with the 2009 Otter Valley squad, who aren’t quite as super-nice or super-fine. Casey decides to go to college and pursue his dream of becoming a dentist.

That’s an automatic $25 million dollar draw at the box office, not to mention endless replays on TNT! I’m taking offers on the script – the working title is Significant Otter.