My brain sort of imploded when I loaded up this Shakira video from the Wal-Mart Soundcheck series, and not for the usual “Wow, she’s hot but this is really over the top” reason. Granted, the Shak is wearing one of her patented asymmetrical spandex body suits, but the mindfudge s caused by the fact that she’ sitting down cross-legged, playing a harmonica with an ethnically eclectic acoustic band. Cue implosion sound: Slrrrrrrrrrrrrrrrrk…PLEEP!

Shakira returned to normal for a performance of “Hips Don’t Lie” where she once again performed in her new ‘sexilepsy’ style introduced on her “She-Wolf” video:

Shakira seems to be quite popular, so I imagine I’m in the minority when I say that she doesn’t seem to maintain a good balance between being sexy and being a musician.

As is often the case with female pop singers, my introduction to Shakira has been entirely via the video format, whether it’s her performing live or in an actual music video, and I can never seem to remember what the song sounded like. She seems to consistently overplay her sexiness to the point where the music doesn’t come through. I can watch a Britney or Lady Gaga video where they’re jiggling around in underwear or making sweet love to a stripper pole, and I usually remember something about the song as well. Maybe it’s just that Shakira’s melodies aren’t as strong? I dunno. I welcome a conversion attempt by the Shakira Nation!

OK, I can’t do this post without including at least one image of Shakira blowing a harmonica… 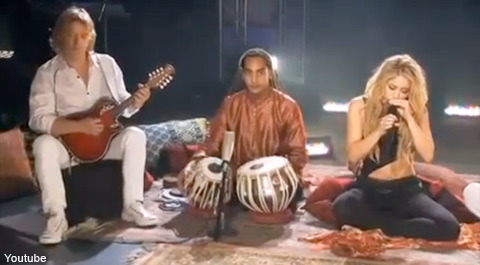 Shakira enters the Guinness Book of World Records as the "Sexiest harmonica player EVER!"

Order your copy of Shakira’s new CD She Wolf from amazon today!

Shakira and boyfriend Gerard Piqué are expecting their first child