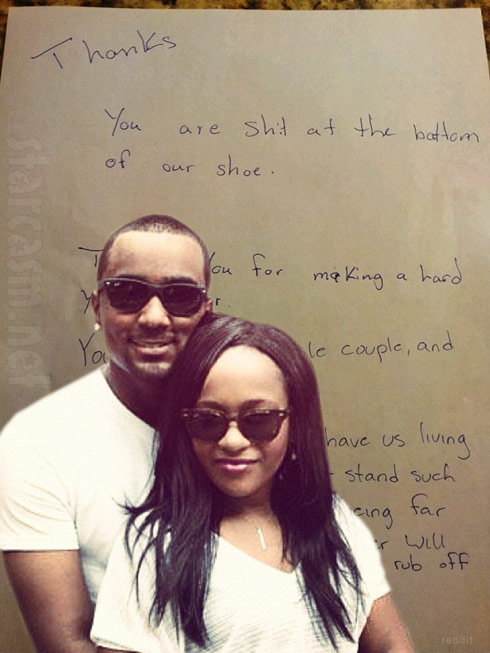 For Whitney Houston and Bobby Brown’s daughter Bobbi Kristina Brown things have been relatively quiet of late after she made headlines for announcing her engagement to her adopted brother/boyfriend Nick Gordon in October and getting into a string of car accidents earlier this year. But, although things have been quiet publicly, it appears that has not been the case privately for Bobbi (literally) as she and Nick have reportedly been tossed from their Alpharetta, Georgia apartment after numerous noise complaints from neighbors. (You might remember that police found the couple’s car smashed up back in September after arriving at their apartment for a noise complaint.)

Further evidence of Bobbi Kristina’s inability to keep silent is that she apparently didn’t go quietly after being evicted. According to a poster on Reddit claiming to be a close friend of Bobbi’s former neighbor, Bobbi allegedly left this angry hand-written note on the neighbor’s door: 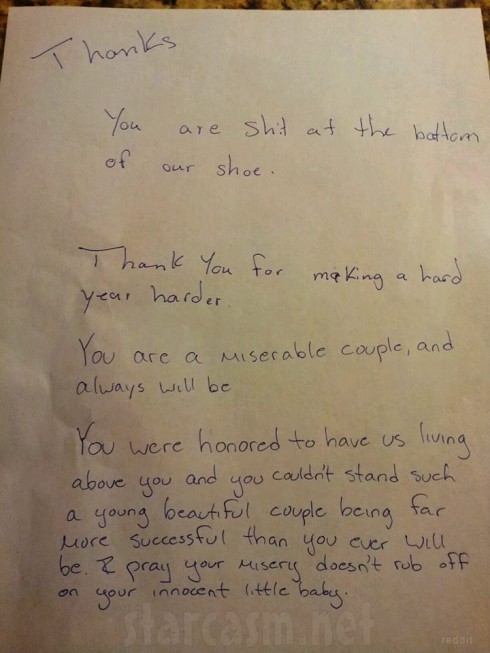 Here’s what the person claiming to be a close friend of the neighbor wrote on Reddit followed by a transcript of the note itself:

My friend and his family live in the apartment under Bobbi Kristina Brown (Whitney Houston’s daughter). After 6 months of complaints, she was finally kicked out. He found this on his door today:

Thanks. You are sh!t at the bottom of our shoe.

Thank you for making a hard year harder. You are a miserable couple, and always will be.

You were honored to have us living above you and you couldn’t stand such a young beautiful couple being far more successful than you ever will be. I pray your misery doesn’t rub off on your innocent little baby.

The Redditor says the neighbors have a one-year-old child and have filed numerous noise complaints over the past six months, including “partying until 5 AM on a weekday.”

Niether Bobbi nor Nick (who reaffirmed their love for one another back in January after appearing to have split up) have confirmed or denied writing the note, though Nick did take to Twitter earlier today with this message:

Aunt Leolah Brown: “Justice will be served” for Bobbi Kristina