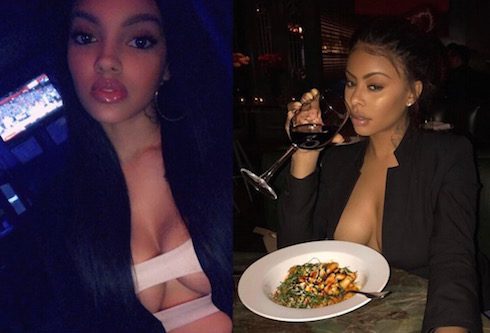 Two of Fetty Wap’s baby mamas allegedly decided to use a White Castle parking lot as their own Thunderdome early one morning this week. Fortunately, both women left — but not before Fetty’s baby mama Lezhae apparently pulled a knife on Alexis, then suffered a beating from Alexis’ crew. The video clip shows a ton of mayhem, Lezhae taking a few blows, and Alexis trying to keep a low profile while the brawl swarms.

First up: the baby mama particulars. Alexis gave birth to she and Fetty’s baby girl Alaiya Grace on January 4th of last year; Alaiya was three months premature and spent 100 days in the NICU before going home. Fetty’s baby mama Lezhae has two kids by the rapper and Love & Hip Hop Hollywood star: a daughter, Zaviera, born in March of 2015; and a son, born in March of 2018.

Now for the details of the fight. TMZ was the first to report the news; according to their original article, Alexis and Lezhae’s beef began several hours before the knife was pulled. Lezhae “tried to fight Alexis” while Alexis and her entourage were partying “at the New Jersey bar where Lezhae works”; Lezhae is said to have even thrown a bottle at Alexis’ car as she pulled out.

Not long after that, Alexis’ friends stopped off at a White Castle in nearby Paterson NJ — which is when Lezhae rolled up, hoping for another chance at Alexis. (Accounts differ on this point; it’s unclear whether Alexis was still with her friends or if she had already gone home.)

When Alexis’ friends jumped out the car, Lezhae pulled a knife. More bottles were thrown, and things got as out of hand as they’d threatened to. Police arrived at approximately 3:20 AM, reportedly arresting Lezhae on a charge of misdemeanor reckless endangerment. Since that doesn’t sound like “assault with a deadly weapon” or “lunging with a mean blade” or anything else knife-related, we’re going to keep checking for police reports and hopefully get the full story.

In the meantime, here’s the video of some of Fetty’s baby mama Lezhae throwing hands in the melee. It’s kind of a busy clip, but apparently, that’s Alexis’ Benz in the drive-thru, with Alexis said to be inside. And, per what Lezhae is saying, it’s Alexis’ crew doing most of the brawling outside the truck, shortly after Lezhae allegedly pulled a knife on Alexis.

Since the news broke, however, a rival narrative has emerged. “Sources close” to Lezhae are now claiming that she and Alexis’ friends arrived at the White Castle “coincidentally” — and that it was Alexis’ people who “stormed” Lezhae’s car, which led to her pulling a knife. The same sources also say that Alexis was indeed present at the White Castle in question (leading to the discrepancy outlined above).

It’s been a busy few days for Alexis, who’s currently said to be maybe potentially boo’d up with Rob Kardashian. Either that, or the two of them are making big reality TV plans — in which case it’s a dead certainty that the fight between Alexis and Lezhae will soon be airing on a TV screen near you.