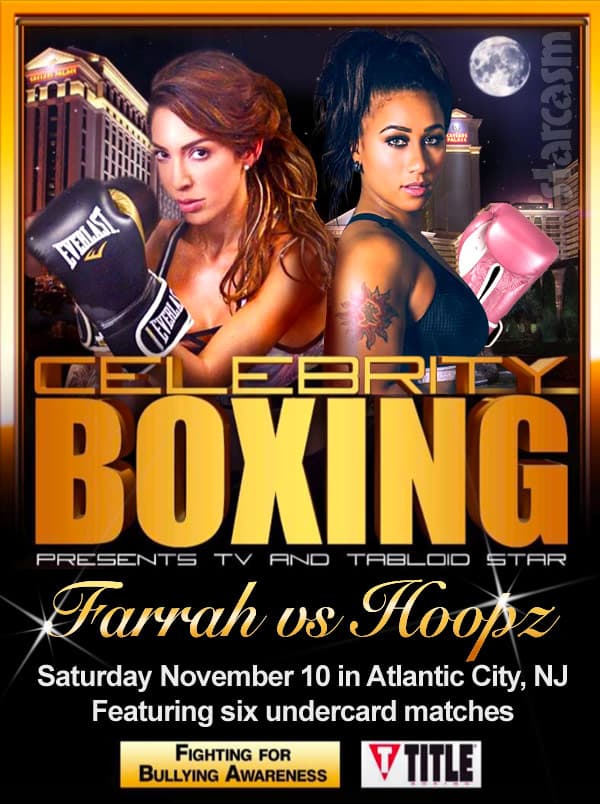 It has been more than two weeks since former Teen Mom OG star Farrah Abraham announced she had signed a celebrity boxing deal with promoter Damon Feldman, and since that time Damon has been teasing the announcement of Farrah’s opponent — including his offer of $250,000 to both Lindsay Lohan and Paris Hilton to step in the ring with Farrah. Well, the wait is finally over as Damon has just announced who will be exchanging blows with Farrah for the first ever Female Celebrity Boxing Championship belt! Will it be one of Farrah’s MTV co-stars like Amber Portwood, Kail Lowry or Lindsey Nicholson? Or maybe it will be her new nemesis, former Mob Wives star Drita D’Avanzo?!

Farrah Abraham will be boxing Flavor of Love Season 1 and Love of Money winner Nicole “Hoopz” Alexander! In addition to her undefeated record in the reality television ring, Hoopz has also gained attention by dating Shaq and also appearing as an actress in the movie Ghetto Stories and the Oxygen series It Takes a Sister.

Damon made the official video announcement on The Blast. That clip’s not embeddable, but Damon shared a poor quality version on Instagram:

Tickets are already on sale for the battle royale at upcomingevents.com. The epic reality show-down will also feature eight other to-be-announced bouts before the main event. Ticket prices are $45 for general admission, or $75 for “Red Carpet VIP” admission. The VIP tickets includes access to the red carpet, ringside seats, and a meet and greet with the celebrity contenders.

Nicole shared her excitement about the announcement on Twitter. “??Ooooo I can’t wait!!! So excited to get in the ring!!! ITS GOIN DOWN NOV 10!!?” she tweeted.

Farrah shared the announcement as well, but she has yet to offer up any comments of her own. C’mon ladies! We need some pre-bout trash talking!

MTV did not fire Amber Portwood, continues filming her for next season