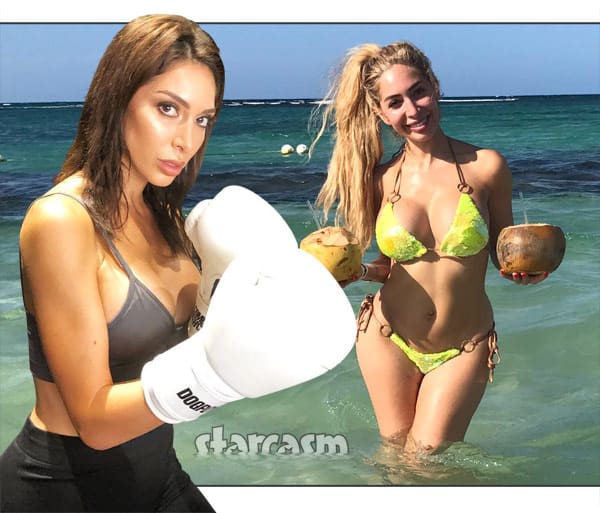 Former Teen Mom OG star Farrah Abraham has been training for weeks in preparation for her celebrity boxing match with Flavor of Love and I Love Money vet Nicole “Hoopz” Alexander in Atlantic City on November 10. Hoopz has a very athletic background that includes boxing as part of her fitness regimen, so Farrah has quite a bit of ground to make up if she wants to avoid becoming a punching bag when they ring the bell in just over two months. And speaking of punching bags, Farrah famously has a pair of very large breast implants, which will surely take a beating during her match with Hoopz. Is that a health concern for Farrah? Is there a risk that her implants might rupture?

“Breast implants clearly create some cause for concern in a sport where an impact to the chest is not going to be uncommon,” Dr. Alan Matarasso, a Manhattan-based cosmetic and plastic surgeon who’s spent 30 years in practice, and a spokesperson for the American Society of Plastic Surgeons, told Vice‘s Fightland in April of last year. “Any trauma to the chest area has that potential risk [of rupture]. You have to weigh that, like most things, against the likelihood of it happening.”

Dr. Matarasso was responding to the New York State Athletic Commission pulling UFC strawweight Pearl Gonzalez from a bout due to her having breast implants. MMA fighters are susceptible to much higher impacts via knees and kicking, but the basic principals of what the doctors states apply to traditional boxing as well.

“Breast implants are the number one cosmetic surgery procedure — forget fighters, it’s just a ubiquitous operation. And they have a very strong, long safety record. But I think if people are going to get into extreme, physical activities, it’s worth a conversation with your doctor at minimum. Whether or not this falls under a state regulation, it’s worth a conversation because it’s an extremely common operation that has a risk that liposuction doesn’t have.”

Dr. Matarasso says that in regards to breast implants rupturing, silicone implants are a much greater concern than saline implants. Obviously, you do not want either to break, but saline is essentially water and the fluid can easily be absorbed by the body. In contrast, silicone can be much more complicated. “We don’t like it if a saline implant breaks or ruptures, but you go in there, remove the IV-bag-like pocket, put a new one in, and the water gets absorbed into the body. With silicone, you have to take out every droplet of that jelly-type material. If that jelly material is extra-capsular, then it becomes even more of an issue to remove.”

In addition to the type of breast implant affecting the risk factor, the size can also be a concern. “This is speculation, but theoretically, the larger the implant or the smaller the existing breast, the more susceptible [it would be to rupture],” Dr. Matarasso states. “If the fighter were to wear padding up top or if they had more natural breast tissue and a smaller implant, it might cushion some impact.”

What size and what kind of breast implants does Farrah Abraham have? During her most recent breast augmentation (her third) in October of 2015, she opted for 800cc silicone implants. So she fits the bill for the two highest risk factors: silicone and very large.

Perhaps there is some sort of bra armor that Farrah can wear to help prevent rupturing of her breast implants? (We have reached out to Farrah’s camp for comment on whether or not she is taking extra precautions, and we will update when we hear back.) If she is going to wear some sort of protective “armor,” that would seem to give her an unfair advantage over Hoopz, right?

And speaking of Hoopz, I did some research and could find no evidence that she has had breast augmentation surgery. If she has, she certainly elected for a more subtle cup size than Farrah: 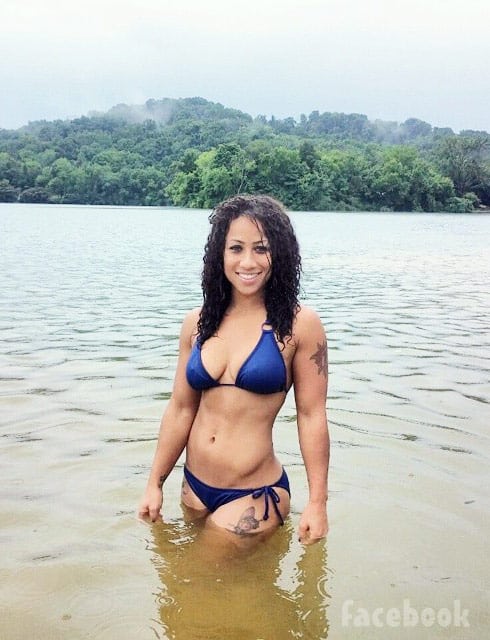 Farrah Abraham and Nicole “Hoopz” Alexander will square off in the ring on November 10 at the Showboat Hotel in Atlantic City. But for those of you a little too impatient to wait, Farrah mended a torched bridge and returned to CamSoda last night to live stream herself training in multiple lingerie looks — looks that will reportedly be given to the highest tippers! “Sources at CamSoda tell [TMZ] Farrah will slip into 4 outfits during the workout, and whoever tips her the most during the camshow … will win one of the sweat-drenched items.”

And for those of you who missed out on reality television’s Million Dollar Baby doing her not not-safe-for-workout on CamSoda, here is a much more tame video of Farrah’s implants undergoing a preliminary stress test (aka extreme bouncing) while jumping rope on a trampoline in Costa Rica:

I do not know if Farrah’s heroic sports bra or Daisy Dukes are available for purchase.