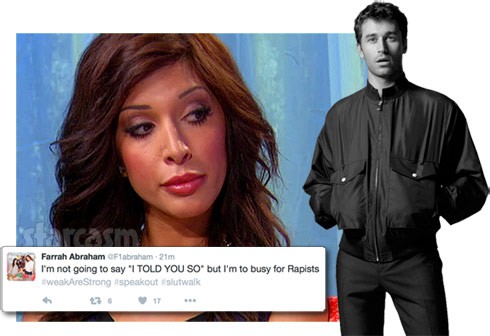 James Deen was the man who appeared in Farrah Abraham’s infamous sex tape Backdoor Teen Mom. Abraham has always claimed that the pair were dating at the time. Even though the video certainly appears to be professionally shot, she still argues that it was never intended for the public and that the release of the footage was based on a betrayal by Deen.

Deen has been in the headlines recently as a number of women have come out making rape and abuse allegations against him. Starcasm was first to report the news when Deen’s former girlfriend and fellow adult film star Stoya tweeted out that he had raped her.

In an extensive interview posted today via The Daily Mail, Farrah said:

“James Deen raped me for his benefit of fame. He conspired against me with others that I thought were my friends at the time and that was very hurtful. I let it all go and I wanted to move on; due to the public and others in the media believing an abusive womanizer, sex addict, disgusting, unprofessional, adult entertainer’s lies.”

When Farrah was asked about why she did not go to the police at the time she explained, “This has already been privately taken care of and still, and always is, consistently being monitored by my legal team.”

Farrah says she met Deen through a “former manager” but added that she could not identify who this woman is because of a lawsuit she later brought against her. 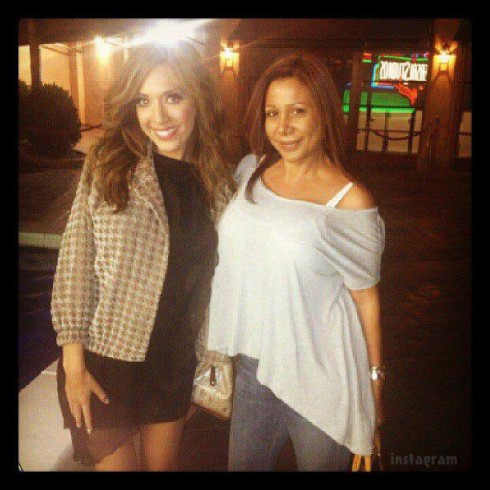 A rep for Farrah’s manager at the time, Gina Rodriguez, had the following to say about Farrah’s statements when contacted. “The story Farrah is telling is completely false and defamatory. Gina did not introduce Farrah and James, she met him through the company she made her video with. Gina has never worked with James when she was in the adult industry for the brief time she was in. She barely knows James, she has only spoken to him on a few occasions. She was never sued by Farrah, so all her claims as usual are false.”

Farrah then went on to explain how the relationship developed between her and Deen:

“I was dating him, getting to know him, it wasn’t like we were in-depth. I don’t live in LA so I was going between Miami and Iowa and LA. He said, ‘I do adult films for a living, I’m single, I’m just hanging out and I would really like to get to know you more.’ I was a naïve 21-year-old, my conversations were about getting to know someone, figuring him out. I was just hanging out with him. He would take me out, drive me around, like any other possible girlfriend. We would always hang out and be out publicly. There’s public pictures of us, holding hands, being boyfriend, being girlfriend.”

“James was so kind and so nice at first. I’m very specific about the guys I don’t like and what I’m not okay with. I don’t like people who smoke and have tattoos. He acted like he didn’t smoke for a while but about the third time we hung out, he was smoking, acting more like his real self. He was putting on a show for me. ‘He told me, “the girls I work with are great” but I actually asked him to not talk about that because I wasn’t interested in it and I wasn’t attracted to his career.”

“I was very clear. It’s great that he has his job and his career but I’m not interested in that. I don’t know if he tried to bring up other women to maybe seduce me, to see if I was up for other things with him. But I was not into any of those things. If I wanted to have sex with him that was for my personal fantasy or for my private life. I’ve had sex with other celebrities and it’s ok to have fantasies. At the time I was 21, I was very vulnerable and I was going through a lot of s**t in my life. I thought he was attractive at the time. Do I think he’s attractive now? No.”

Farrah then shared an anecdote about a particular evening that she says should have been a warning sign:

“There’s one thing I’ll never forget. He picked me up at a hotel when I was staying and I was like, ‘Can you come to my room because I can’t get my dress shut.’ It zipped in the back and I couldn’t reach it. He said, ‘Yeah sure.’ I’m not one to f*** the first time or second time, it really takes me a while to have sex with someone. But he came in the room and he thought I wanted him to f*** me. He was trying to take off my dress rather than zip up my dress. Because of that weird altercation with him, I said ‘we need to leave and get out of here.’ I had to push him out of my hotel room because he was so pushy. That stuck in my mind, like wow, he must really be pushy with other women.”

Farrah claimed previously that she had been drugged and raped but never named her attacker. When asked point blank by The Daily Mail if Deen had raped her Farrah said, “From my intensive therapy, yes. Under my doctor and everything that I’ve been through, that is what has gone on.”

Abraham went on to say that Deen had drugged her, “Clearly I was drugged, and my legal staff and my therapist know that. I don’t know if he just drugged women to take advantage of them or what was going on. I experienced extreme anger problems and abusive behavior from Deen. He treated me like he wanted to break me and ruin my career as a reality star-celebrity, as many witnessed. I no longer wanted to be around him.”

Deen has always stated that the tape was an elaborate scheme concocted by Farrah as a backstory excuse to release an adult film.

“After the last time he kissed me and dropped me off, he was so quick to call and set-up interviews. I tried to talk to him on the phone and you know what he said to me? ‘Oh, would you like to have a cup of tea?’ and just laughed about it. I was lied to by him and he doesn’t give a s**t about anyone but himself. It was a set-up against me by James Deen. I can only talk about my situation, I can’t talk about anyone else’s. I got dropped from MTV’s Teen Mom back when all this happened, a show I created and starred in. He conspired what he did with me, this is the truth. The rape victims coming forward are telling the truth as well. They would have no reason to be lying or defamatory in what they’re saying. I’m thankful that I have separated myself and gotten beyond how horrible, evil, abusive and a rapist James Deen is.”

Farrah tweeted an open-for-interpretation response after the other allegations were made about Deen that she now explains was about moving forward with her life. “I no longer need to feel I’m locked down and let this rule my life – I’m too f*****g busy for this. The weak are strong – we don’t understand how strong of a person we are until we go through so much s**t,” she said.