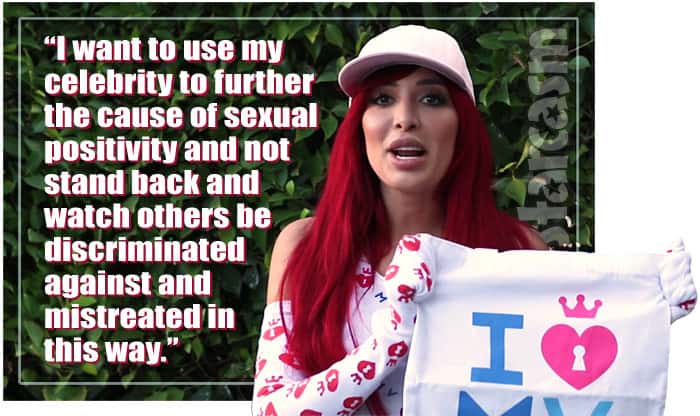 (Former?) Teen Mom OG star Farrah Abraham is no stranger to turning negatives into positives, and that’s exactly what she is doing in reaction to what she describes as bullying and sex shaming by MTV producers when they “fake fired” her over her sex industry endeavors. It was announced today that Farrah Abraham has been named an MV Ambassador for adult video site ManyVids where she will be promoting a platform of sexual positivity.

“I believe now more than ever that it is the right time to be an MV Ambassador for Sexual Positivity,” Farrah said as part of the announcement. “I feel passionate about empowering men and women to have a healthy consensual sex life. I want to advocate to end sexual harassment.”

From ManyVids, which describes itself as “the leading online destination for premium, original adult content:”

ManyVids is inspired by Farrah’s passionate dedication to making sure sex workers are treated with the respect and admiration they deserve. The motivation behind everything we do is to empower sex workers to become independently successful by giving them the platform to be themselves.

With that in mind, we couldn’t be happier to announce that Farrah Abraham has signed on to become the next MV Ambassador!

We’re so thrilled to join forces with such an accomplished public figure who is using her star power to fight back against sex shaming. We know that with her as an MV Ambassador we’ll be able to achieve a great change in the public perception of sex workers.

To kick off her ambassadorship, Farrah will be LIVE on ManyVids for an MV Takeover on November, 22, 2017 from 10 pm to 12 am ET. Join her for an amazing show and chat session broadcast exclusively on ManyVids.

Farrah explains at length about her decision to accept the ambassadorship on the ManyVids website, which we cannot link to due to advertising restrictions:

Recently I was sex shamed and sexually harassed while filming the next season of a reality TV series (to be released Nov 27th). As an original cast member of an international franchise, I believe now more than ever that it is the right time to be an MV Ambassador for Sexual Positivity. After being degraded and sex shamed, I feel that my experience as a keynote speaker for unplanned pregnancies and safe sex is my segue into this type of ambassadorship. My credentials as a business mogul include celebrity licensing for novelty toys, intimates in celebrity award winning categories and beyond. It’s a powerful position to express my freedom (as others do in private) in a public forum so others won’t be sexually shamed, sexually berated, sexually harassed or have hate crimes instigated against them for practicing their legal sexual freedoms. To dismiss illegal behaviors of this sort which affects a person’s health, well-being and career opportunities is unfathomable. I want to use my celebrity to further the cause of sexual positivity and not stand back and watch others be discriminated against and mistreated in this way.

I feel passionate about empowering men and women to have a healthy consensual sex life. I want to advocate to end sexual harassment, hate crimes, and intimidation through falsified press. The hateful acts and illegal misconduct needs to end immediately. A healthy consensual sex life is not taboo! I only hope to help sustain a safe, healthy positive environment in society (which is lacking), on a public level for myself and others in entertainment (adult or not) and all other industries/companies. As an employer myself, I do not allow any sexual harassment or mistreatment of any sort as that is illegal. I’m a hard-working professional mother and my successes and work ethic speak for themselves rather than including my sexuality. My advocacy for social justice is appreciated by men & women who are or have been sexually harassed, degraded, sexually ashamed, sexually abused, sex trafficked, captured by sex cults, date raped, assaulted and/or otherwise violated daily. I would rather influence sexual positivity with my MV Ambassadorship than give in and succumb to the discrimination, intimidation, and hate crimes of an unhealthy sexual society that seems to be our everyday reality. Today I’m here to change that! As I further my advocacy and ambassadorship for sex positivity I plan on including my experience in my first business book to be released in 2018.

And here’s a video clip of Farrah promoting the takeover:

Well, you know what they say — you can’t spell “ambassador” without “ass” amirite? 😉 (I tried to make an “ambackdoor” joke work, but couldn’t pull it off.)

All joking aside, the issue of “sexual positivity” (and there are other terms as well) is an important one. There are women (and men) who are comfortable being nude and performing sexual acts in front of a camera, and getting paid for that is perfectly legal. And most everyone is well aware of the HUGE number of people who watch it — both those who pay and those who watch for free. So why is it still condemned so harshly by our society? Is it a valid condemnation? Are people just insecure about their own sexuality? Is this something that most people would prefer to be illegal? These are great questions — and I’m sure Farrah will be tackling a lot of them during her MV Takeover on November 22 from 10/9c to 12AM/11PMc. Perhaps she will also tackle the biggest question of all after becoming a #FarrahAbrahambassador… Why is she wearing socks on her hands in the videos?! Perhaps to promote socksual positivity? #IllBeHereAllWeek 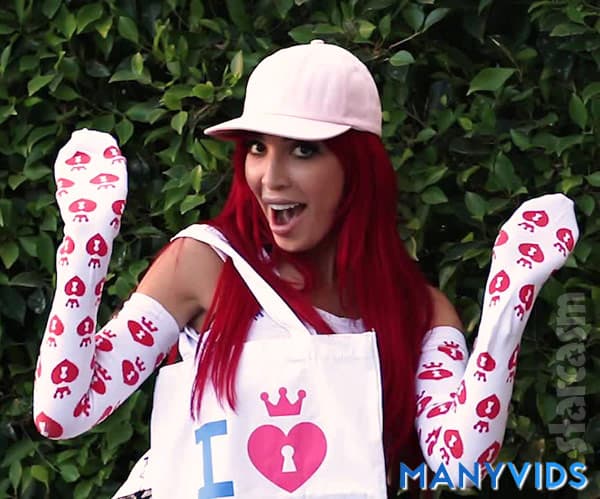