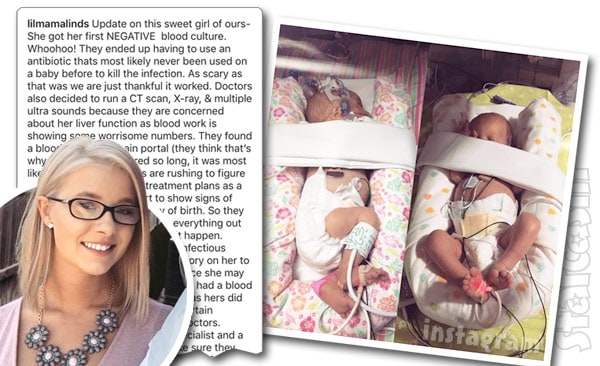 After a VERY difficult pregnancy, former 16 & Pregnant star Lindsey Nicholson was less than 30 weeks along when she gave birth to twins Jackson and Paisley on October 25. Over the last few weeks, Lindsey has updated fans on the twins’ health struggles, including her most recent update revealing that Paisley’s condition was so dire that doctors were forced to place her on an antibiotic that had not been prescribed to a baby before.

Before I get to the updates, let me just say up front that overall the news looks to be good news. Both Jackson and Paisley have had their battles, but they seem to be fighting through them and there is good reason to be optimistic.

OK, I will share Lindsey’s updates from earliest to most recent, a few of which we added to our previous post about Paisley and Jackson’s health:

OCTOBER 26
My heart has never been so full. I knew having preemie babies would be hard, but I wasn’t prepared for how hard it truly is. My heart hurts. Knowing tomorrow I have to leave this hospital without them crushes me. I’m beyond thankful they are doing so well for being born at 29 weeks. The Nicu as we’ve already learned is a roller coaster. This morning everything was great & tonight we found out Jackson has an infection. Thankfully they caught it soon and are treating it. Hearing him cry in discomfort without being able to hold him is any mother’s nightmare. I know I have to stay positive during this time & realize they are in amazing care??❤️ #preemietwins #preemiemom #nicufighter

OCTOBER 30
Can’t believe it’s been 5 days already. So proud of these two. They are such fighters. Paisley’s feedings have been moved up to 10ml, they are taking her off cpap today, & she opened her eyes yesterday for us ❤️ shes doing incredible. Kicking this NICUs butt. Jackson is having a little harder time. For some reason males especially white males take a little bit longer to get to where they need to be in the NICU. He wasn’t holding down his feedings the past couple days, but today they are starting him on 2ml a feeding, lowered his oxygen levels & turned down the cpap. He’s making progress , oh & he opened his eyes for mama this morning ??? this has been the hardest 5 days of our entire lives. Can’t wait to have our babies home with us. I wanted to thank everyone for reaching out to us. Truly means the world. I know I haven’t gotten back to so many. I’ve been exhausted & just trying to take some time to register all of this. #29weekers #twins #tinybutmighty

NOVEMBER 1
[With photo of Jackson] Im one week old today. I’m officially breathing on my own like sister & off Cpap? my eyes are blue/green like mama, & my hair is brown like daddy. I’m one happy boy when my parents hold me? #GODisGREAT #3lbsofPerfection

NOVEMBER 4
Got a call first thing this morning to come to the NICU as our Paisley has staph infection ? They are doing a spinal tap now on her to see if it’s moved into her spine & caused meningitis. She’s also getting a blood transfusion. Please,please, please say a prayer for her??? #poweroftheprayer #10daysold #31weeksgestation

NOVEMBER 7
Jackson James & Paisley Ann update: Paisley did end up having staphylococcal meningitis. Her blood cultures have now been positive 4 days in a row. The antibiotics are not working. They are giving her stronger doses and different kinds in hopes they can kill the infection within the next day or two. Thankfully the meningitis hasn’t gone to her brain or heart. Jackson- has now been diagnosed with E.Coli & Staph infection that has turned into meningitis as well. They are doing a head & heart ultra sound on him to see if it’s gone to either places. I can’t even put into words how we are feeling right now. Our hearts hurt. We are angry. We feel broken. I don’t understand why our babies have to go through this. Please keep praying. #3lbsofperfection

NOVEMBER 10
Twin Update: Love this little guy? besides his hair and eye color he’s his daddy’s twin. Put a beard on him and you wouldn’t know the difference ? he even gives me the same grumpy looks as his dad when I wake him up ?? Jackson is doing really well health wise. He’s had 2 negative blood cultures in a row. Meaning the staph & E.Coli are no longer in his blood stream. He’s not showing any signs of being sick?? -Paisley?is now on day 7 of positive blood cultures. Doctors are really praying the antibiotics will start working soon, but having 7 days of positive blood cultures is uncommon and not good. They are worried about her liver now & she may need a possible surgery. We will know next week. Staying extremely hopeful that she doesnt. Good news is shes been tolerating her feedings great and has moved up to 20ml. I know she’s going to get through this. God is way to good to let anything happen to our baby girl. #16daysold #3lbsofperfection #tinybutmighty
#nicuawarenessmonth 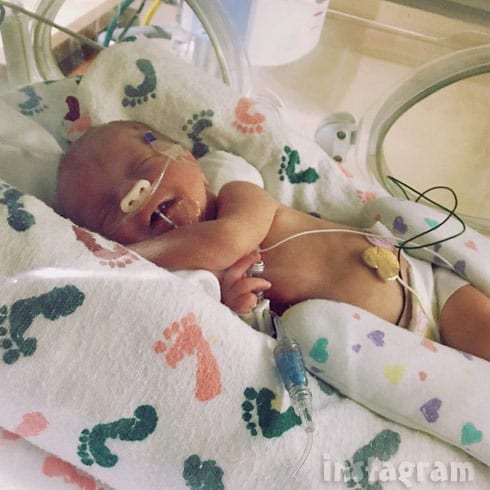 NOVEMBER 15
Update on this sweet girl of ours- She got her first NEGATIVE blood culture. Whoohoo! They ended up having to use an antibiotic thats most likely never been used on a baby before to kill the infection. As scary as that was we are just thankful it worked. Doctors also decided to run a CT scan, X-ray, & multiple ultra sounds because they are concerned about her liver function as blood work is showing some worrisome numbers. They found a blood clot in her main portal (they think that’s why the infection lingered so long, it was most likely hiding in it) Doctors are rushing to figure out the exact issues and treatment plans as a liver typically doesn’t start to show signs of failure until 60 days from day of birth. So they are working promptly to figure everything out before the 60 days so that won’t happen. Paisleys case is so rare that the Infectious disease specialists are writing a story on her to warn Doctors around the world since she may be the only baby in the world that’s had a blood culture remain positive for as long as hers did and have to be treated with this certain antibiotic . So thankful for these doctors. They’ve also called in a Blood specialist and a pharmaceutical specialist to make sure they get everything figured out within the 60 days . Because of the severity of her infection she has to remain on antibiotics for 4-6 weeks. They also found possible signs of pneumonia in her lungs. They will be keeping a very close eye on it. Needless to say.. Little Paisley is one hell of a fighter. She definitely made her statement in the medical world. As you can tell by the picture she’s feeling much better and smiling a lot now? As for Jackson, he’s doing awesome & was able to get off antibiotics today ! Please keep praying for both our precious babies. Can’t wait to have them home ????

If you want to keep up with Jackson and Paisley’s journey be sure to follow Lindsey on Twitter and Instagram. Positive comments and well wishes are welcome! (If you’re heading over there to offer up negativity, you should probably take a moment to re-examine your life.)

Did Jennifer Del Rio scheme pregnancy to appear on 16 & Pregnant?