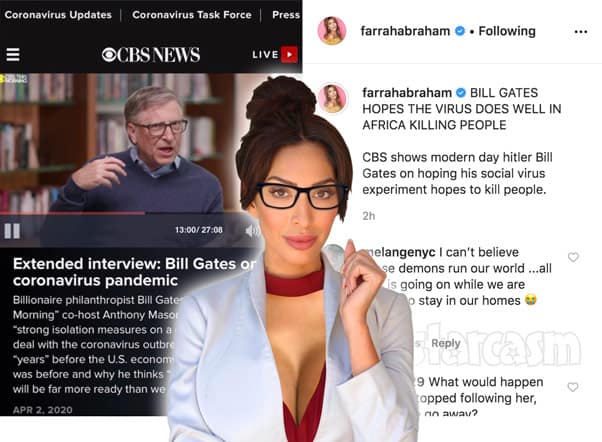 Former Teen Mom OG star Farrah Abraham has made a career out of generating controversial headlines, and she’s not about to let the coronavirus pandemic slow down her career. One week after the single mother of one was in the news after her purchase of a new puppy was cancelled by the breeder due to public backlash, Farrah is taking to social media to launch a crusade against billionaire philanthropist Bill Gates. Farrah calls Bill a “modern day Hitler” and suggests that the current coronavirus pandemic is perhaps his doing in an attempt to make money on a vaccine. At least I think that’s what she’s saying.

I should set the stage a bit by providing a little background info on Bill Gates and his connection to pandemic research. (If you want to get right to Farrah’s comments, just scroll down to the subheading.) The Microsoft co-founder and his wife, Melinda Gates, created the Bill & Melinda Gates Foundation in 2000. The charitable foundation has been identified as the world’s wealthiest, with assets reportedly valued at more than $34.6 billion.

The foundation is organized into four program areas: Global Development Division, Global Health Division, United States Division, and Global Policy & Advocacy Division. One huge focus of the Global Health Division is to study diseases, including how to prevent and how to respond to epidemics and pandemics. Just like every other expert in the field (or documentary made about pandemics), Bill has stated numerous times over the past decade that a global pandemic is inevitable and just a matter of time. (You can watch Bill’s 2015 Ted Talk on the topic of the world’s unpreparedness here.) Bill has also talked about the potential for dangerous infectious diseases to be manufactured in a lab.

The Bill & Melinda Gates Foundation has been extremely proactive throughout the current coronavirus pandemic, committing up to $100 million to help with the COVID-19 response around the world more than three weeks ago. Just yesterday it was reported that a new COVID-19 vaccine candidate from Inovio Pharmaceuticals is entering Phase 1 clinical human testing. Inovio’s ability to scale up research on the vaccine rapidly was due in part to backing from the Bill and Melinda Gates Foundation, as well as funding from other nonprofits and organizations.

In addition to the work of the Foundation, Bill has been an insightful voice about the reality of the current coronavirus during a time when Americans were receiving a lot of mixed messages. President Donald Trump admitted to the nation that the coronavirus “is a very contagious virus” on March 15, but he assured us that it “is something that we have tremendous control over.” Three days later, Bill Gates did an AMA (Ask Me Anything) on reddit in which he answered numerous questions at length. Bill did not sugar coat any of his responses, but he also remained positive and focused on the things that we can be doing to lessen the catastrophic effects of the coronavirus pandemic. (I read through the AMA at the time, and it helped clarify a lot of things for me.)

Farrah’s take on Bill Gates’ insights and role in the coronavirus pandemic is clearly different than mine. She took to Instagram earlier today and made two posts calling out Bill for all kinds of evil deeds. It’s hard to pin down all of Farrah’s accusations specifically because of her creative use of the English language, so I will just hand the microphone over to her and let her speak for herself:

I didn’t sign up to take part in social virus research project killing people in every country with billions @thisisbillgates is after from our government- he wanted attention, he wanted to test the government, Congress step up we should not have debt, taxes, student debt or have to repay loans as Bill Gates “testing” did a social experiment & hopes it does well killing people! In Africa as said on CBS -That is man slaughter killing as many people as he has – he should be in jail and test his own viruses on himself – @realdonaldtrump maybe change the federal government laws that allowed patented man made viruses. Bragging about China Virus lab since 2017 & Harvard Started it no wonder their giving free classes right now. Bill Gates wants the 600 billion America invests to protect us all-to actually kill us all. I did not elect to be apart of this social testing & this is illegal. Bill Gates is modern day Hitler – Share this video to help change the laws & prevent greedy virus creators of the virus & cure. As a mom I will not get a vaccine that can kill people.When everyone is dead I hope you enjoy all the money in hell Bill Gates.Follow @dreamrare maly watch the video https://www.facebook.com/124411634236128/posts/3136593436351251/?vh=e

???? All manufacturing should be local – create more jobs and I’m scared to ever go to #China again. #covid19 #coronavirus #covid19truth #farrahabraham #wuhanuniversity #wuhanvirus

COMMENT: Farrah I think you did good posting this video idk why people are seriously bashing you on this….. This is terrifying and I don’t even know what to do!!! Far more scarier than we ever thought it was…..

FARRAH: Thank you & either way I hope this helps people prepare, focus and not panic & I want safety & equality for all countries, all people and no one should be part of a social research experiment they did not sign up for ?????❤️❤️❤️❤️

UPDATE – Farrah deleted one of her posts and returned with another post complete with a Farrahspeak essay:

Wow play tennis ? together buddies doing an interview to cover up @thisisbillgates is ok killing people, wasting billions of dollars- This a man made patented virus #wuhanvirus that Bill Gates says is not man made? Why is some host ok hearing any percentage of deaths is ok? Bill Gates you claim to have a foundation to already have vaccines made but you failed at getting a vaccine made for over 5 years- Bill Gates only talks about wanting billions from the government yet claims he’s wealthy enough to know these things already?

He was good with computers ? not people who talk back after being infected with his viruses ? he created. Doctors in infectious disease should only be talking & not covering up the truth of modern day hitler @thisisbillgates Bill Gates can pay and give more to viruses and not help people yet letting people be killed and claim HE ONLY HAS THE VACCINE WE ALL NEED- he’s no savior when he allowed this out break & all of his friends host news shows to not ask more pressing questions -good luck playing tennis ? when your friend @thisisbillgates doesn’t care when you die because you we’re apart of his social virus experiment that you never gave consent in being his trial research project for and looks forward to taking your money with his “vaccine” he hasn’t had for over 5 years.

He should be in jail with his mentally ill power trip that has lead to millions of deaths. All of those he persuaded in federal government and media should stop supporting anyone person who thinks it’s ok people of any percentage die for his gain of money & wealth that should only go to real doctors with real backgrounds in disease control. Enough Said ! I want to hear a disease doctor speak … oh wait my mom married one ??? Stay Safe & God Bless Everyone Who cares about senior citizens, youth & our economy & society. In one nation under God With Liberty & Justice for all. #america #coronavirus

For those of you curious, here is the full interview with Bill Gates on CBS This Morning:

UPDATE – Here’s a link to a well-sourced article looking into the rumored patent on the COVID-19 virus and its connection to Bill Gates. Here is the article’s conclusion

We rate this claim FALSE because it is not supported by our research. While there are past ties between the Pirbright Institute and the Gates Foundation, neither organization holds a patent for the novel coronavirus causing the COVID-19 pandemic. The Pirbright Institute is a partner in clinical trials on potential vaccines for the coronavirus, but any patent for a vaccine would be months away at this point. Neither Bill Gates nor the Gates Foundation is involved in patenting any potential vaccine, and thus do not stand to profit from it.

For those of you even curiouser, here’s Farrah’s tweet from March 15 linking to her and Nina Gray’s YouTube video about how moms love coronavirus season: 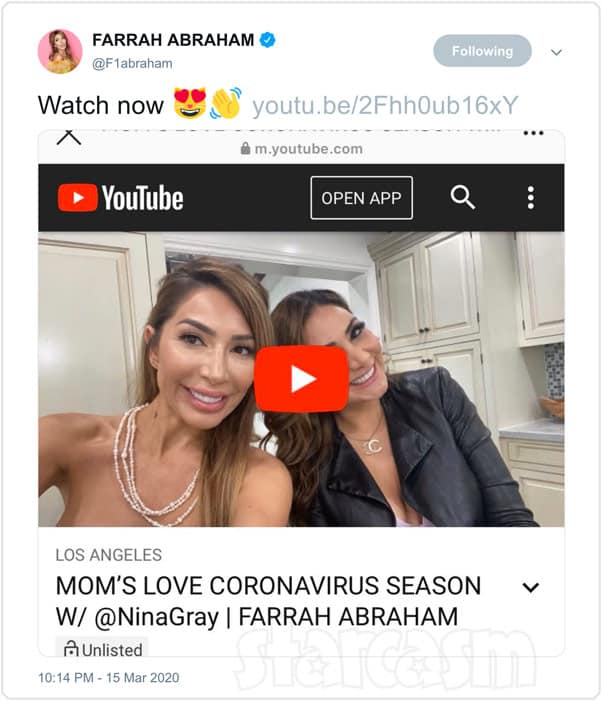 Catelynn Lowell gets treatment for anxiety and depression