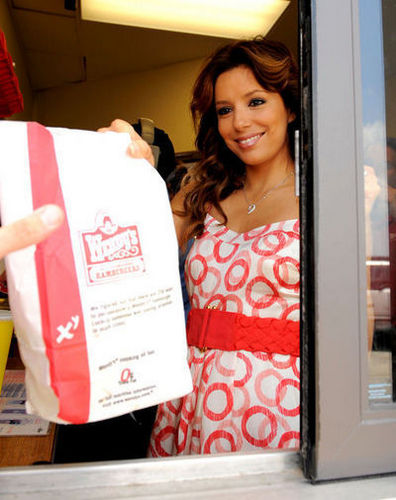 Eva Longoria owes her Hollywood success in part to a fierce work ethic she developed at a young age. Eva dished to Katie Couric on Katie today about her fast food past. She started working at a Wendy’s restaurant as a young in her hometown of Corpus Christi, Texas in order to pay for her quinceañara, and ended up staying for six years.

“I make a good Frosty. I was manager by the time I was 18. I love Wendy’s. I love that whole experience in my life. There’s four girls in my family, no boys, and I’m the baby, and nobody got a quinceañara, which is the fifteen birthday for us Mexicans. And, my dad said ‘Your sisters didn’t get a quinceañara, so you’re not getting a quinceañara,’ so I went and got a job and paid for it myself, and then raised money from my family.”

The Desperate Housewives star also worked several jobs in college, including at autoshop, a TCBY, and a dental office. Actually, Eva is still working her way through college. She’s about to graduate with a master’s degree that she started when she was still working on Despearte Housewives. She would go to night school classes after days on set of the popular show. “I wanted to be literate on everything,” she told Jay Leno last year. “I wanted to study immigration.” Eva earned her bachelor’s in kinesiology (scientific study of human movement) from Texas A&M University-Kingsville, but refuses to give up the name of her California university.

Eva isn’t just studying though, she’s in Frontera (out in 2014,) and is rumored to be star in an upcoming romcom called Married and Cheating.

It’s refreshing to see a celebrity who has always known the value of work, and continues to seek education! Eva is using her smarts and credentials to help others wit the Eva Longoria Foundation to help foster education and entrepreneurship for latinas.