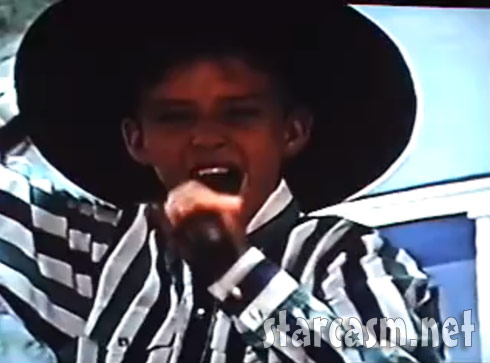 Mega-star Justin Timberlake joked during the Oscars that he was the notorious street artist Banksy. Well we all know that’s not true but the multi-talented entertainer who brought sexy back and then got us tuned into “The Social Network” was once, as many of you know, a young boy who went by the name of Justin Randall (his middle name) who boot-scoot-boogied his 11-year-old country fried boots right on to Star Search.

That clip of little Justin singing Alan Jackson’s “Sounds Like Love’s Got a Hold On You” has darn near 3-million views on YouTube but there just so happens to be another and dare I say more mind-altering hip thrusting video that I’ve discovered of young J.R.! Hot darn tootin’ right I did cowboys and cowgirls. A YouTube poster by the name of bittersweetstyles introduced the clip that’s about to blow your minds this-a-way:

My cousin competed in talent competitions in the Memphis area in the early 90s. It just so happens that Justin Timberlake did too & we found the video. Here he’s singing “Two of a Kind” by Garth Brooks and wins (duh).

Are you ready to watch a prepubescent Justin Timberlake darn near break his one-of-a-kind hips on “Two of a Kind?”  Well you asked for it.  Hit it J.R.!

If your eyeballs still work and you can read this then let’s discuss what our favorite part of that YouTube masterpiece is.  Is it the fact that someone randomly had Timberlake on an old VHS and posted it on YouTube?  Is it that this poster states matter-of-fact that he won and the video proves as much with the announcer stating that Justin had a “perfect” score.  Is it the really, really, really tight jeans and suggestive sexual moves from a young Timberlake or was it that random country house backdrop that lil’ Justin did all his hip swaggin’ in front of?  There is just so much to choose from that I can’t make that call!

Particularly disturbing was the hip grind and vocal emphasis on this line:

“We really fit together if you know what I’m talkin’ about.”

I would like to say thank you to the Academy, thank you to YouTube, thank you to young Justin Timberlake and most importantly thank you to bittersweetstyles and the foresight to know that what you had in a box in the attic should be shared with the world.