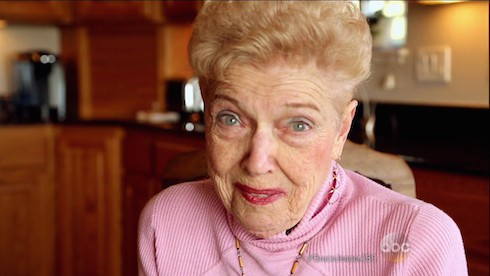 Caitlyn Jenner has seen an ourpouring of support and good wishes since officially announcing her transition yesterday. (With only a few minor exceptions.) One person who fully supports the person that Bruce Jenner has become is his mother, Esther–but that doesn’t mean the change has been completely smooth.

Esther Jenner, 88-year-old mother of newly-female Caitlyn Jenner, admits that it’s difficult for her to not call her former son by his former name. “I still have to call him Bruce,” she says, in the Vanity Fair cover feature on Caitlyn. “His father and I named him that.”

Esther Jenner also pointed out the difficulty she was having referring to her son as a female. “It’s going to be a struggle for me to get used to the change,” said Esther, “but happily so…I’m very happy for him–or her!”

Caitlyn herself acknowledged some of her anxiety in revealing the full transition to her mother. In the same Vanity Fair piece, Caitlyn admitted she sent a private jet to fetch her mother, because she wanted her to arrive as quickly as possible. This flummoxed the interview, who said “You’re the cheapest person I’ve ever met!”

Caitlyn’s response pointed out the differences she already feels between herself and Bruce:

I know, but for my mom I’ll send a plane….What I told [Esther]: ‘Isn’t Caitlyn a much better friend?’ Bruce, he would never send a plane. No, no, no, what a jerk the guy was, OK, Caitlyn is like, ‘Send the plane. Mom, we’re sending a plane, we’re going to go pick you up and bring you down here….It seems like [Caitlyn] has a lot more friends than he ever had.

Caitlyn continued to describe Esther Jenner, this time with more love and confidence:

My mom is, for 89 years old, is extraordinarily open-minded. [Most people,] once they meet you and they spend five minutes with you, they go, ‘Oh, OK. I get it. Big deal. Let’s go on with life.’ And I think my mom will kind of be the same way, especially if Caitlyn keeps sending planes to pick her up and bring her down.