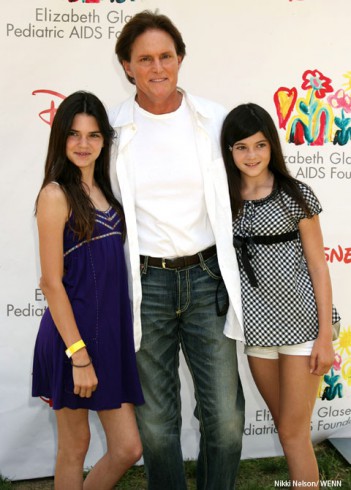 When Kendall Jenner revealed that she and her sister Kylie found some of dad Bruce’s makeup around the house when they were kids, and it really scared them because they thought their dad was seeing another woman.

The thought of those times, and just the overwhelming emotion of this time of transition made Kendall well up with tears. “I just remember being a kid and not really knowing what was going on,” she recalled. “We would find things like makeup or lipstick. We thought he was having an affair at one point, and we didn’t know what to do. We didn’t want our family to be broken up so we didn’t tell anybody.”

“He’s the most amazing person I know,” she went onto explain. “I couldn’t ask for a better dad. He taught me how to ride a bike and be the tomboy that I am… He would drive us to school and he would be the first one in line to pick us up.”

Kendall also said that she caught Bruce dressed as a woman last year at 4 a.m., before he told his family what was really going on. In fact, his whole family is having a time of transition over this. Many families of transgender people experience a bit of a loss over the past self, the person they remember. Even though it’s still the same person, the changes in identity can be disorienting.

Khloe especially had a difficult time accepting that “Bruce,” was going to “go away” very soon. Bruce has been in her life as her dad since she was four years old, and she felt like she was losing him in some way. She also was upset that Bruce still seems to be hiding some things from his family. On KUWTK tonight, Bruce the entire Kardashian side of his family struggled with what he was and wasn’t hiding from them.

Despite some of these difficult feelings, the entire family is supportive of Bruce and the path he chooses. He made it very clear that he planned to be a woman very soon, and his transition is being covered for a brand new show that starts airing July 26.

Kendall was filmed breaking down again over the though of the public not accepting her dad for who he really is. “Whatever people are gonna think, that’s not even part of it at all,” she said through tears. “I’m more worried with how people are going to treat him. I don’t ever want anyone to treat him bad because he is, honestly, one of the greatest people I know. He wouldn’t hurt a fly. So, to think of someone giving him hate, or not being ok with who he wants to be, and what makes him happy, that scares me, and that’s more of a worry to me than anything else.”