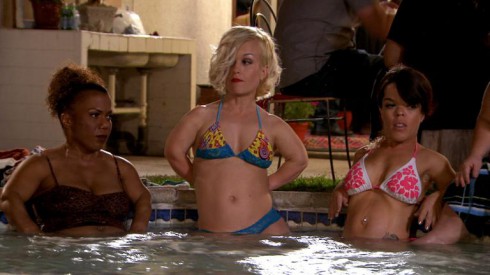 On Lifetime’s new show Little Women L.A. two different Britney Spears impersonators got into a tiff at a pool party over whether or not the word is offensive.

Terra Jole called Elena Grant for using the word in her Vegas show. Eventually they sort of agreed to disagree, but the controversy surrounding this word is fierce. In fact, in 2005 Roger Ebert got into some hot water for using the word in a movie review. What’s the history of this word, often called “The M Word,” and why is so derogatory?

Midget, which comes from a word that means “very small fly,” was first used in reference to a little person in 1865. P.T. Barnum popularized the word when he started using General Tom Thumb in his circus, and it is P.T. Barnum’s use of the word that makes it so offensive. “It’s impossible to think about the word midget without placing it within the context of the freak show,” writer Dan Kennedy wrote in his book Little People: Learning to See the World Through My Daughter’s Eyes.

Little People of America have issued an official statement against the word:

Little people are people who have “dwafism,” which includes anyone who is 4-foot-10 or shorter because of 200 distinct medical conditions. There are still some people who defend the use of the “M-word,” and many people are unaware that there is any controversy about it, a situation that Little People of America is fighting to change.

Want to take a ride on Titanic II?