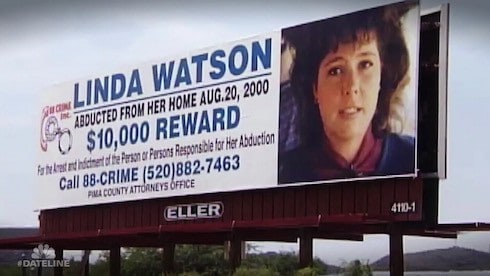 Dateline‘s latest takes a long look at the unusual and ultimately tragic case of Linda Watson. Originally believed to be a missing person abducted from her home in August of 2000, Linda was actually murdered by her husband, former Tucson firefighter David Watson–but she wasn’t the only member of her family to fall victim to David’s wrath.

The basic facts of the case are these. On August 20th, 2000, 35-year-old Linda Watson went missing from her home. For years, Linda’s family–and the local media who reported on the case–believed that Linda had been “violently abducted.” Several peculiarities pointed toward a sudden, unexpected disappearance, most notable among them the fact that Linda had gone without her pager. The 20th was a Sunday, and Linda had gone to church–but the device, something she “never, never went anywhere without,” remained on an open Bible in her home.

Then, nearly three years later, tragedy struck Linda’s family once more. On May 7th, 2003, Linda’s mother Marilyn Cox was gunned down outside her house–alongside friend Renee Farnsworth. Marilyn had moved from Ohio to Tucson after Linda’s disappearance in order to help raise Linda and David’s daughter Jordynn, something she’d been able to do with greater ease after being awarded primary custody of her granddaughter earlier that year.

But Marilyn had also begun rubbing her son-in-law David the wrong way–to such an extent that Marilyn feared for her safety. And she left a paper trail to document those fears. In an e-mail dared February 9th, 2003, she wrote to her sister, Pat Hinkle, “I just want you to be aware that if I should disappear, it won’t be of my own choosing.”

At the time, speculation was that Marilyn had begun to discover what really happened to her daughter–David Watson had been a suspect in Linda’s disappearance from the beginning of the investigation, though he’d never been arrested or accused of a crime. And it would actually take nine more years before the next phase of the investigation could begin. In 2003, hunters discovered a human skull in the Sonoran Desert. Though officials originally believed the skull belonged to anonymous border crosser–according Pima County Detective Mark O’Dell, the skull’s location had been “a heavily trafficked area pathway for a lot of migrants trying to make their way north to Phoenix”–they were surprised to find a DNA match with Linda Watson. 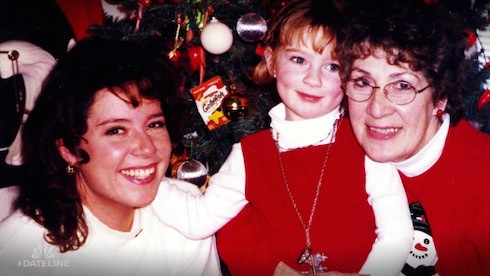 But that discovery didn’t come until 2011. It took four more years to put together the case against David Watson; he wouldn’t be arrested for the murders of Linda Watson, Marilyn Cox, and Renee Farnsworth until 2015. The prosecution in his first trial argued that David killed Linda to truncate a “nasty” custody battle over Jordynn, who was four years old at the time of her mother’s murder. He then, according to the prosecution, “assassinated” Marilyn after she “publicly blamed him for [Linda’s] disappearance.” Renee was merely an unfortunate victim–”so much collateral damage”–she’d had the misfortune to be with Marilyn at the time she was gunned down. (Marilyn was shot five times–including once in the back of the head at near-point-blank range.)

David Watson’s 2016 triple-murder trial ended in a hung jury after three days of deliberations. Earlier this year, though, his second trial began. This time, the prosecution had a different judge (the first was unable to preside because of “medical issues“), and a new emphasis on the role of the woman who’d been David’s biggest supporter in the custody battle over Jordynn: his second wife, Rosemary Watson, who “picketed outside the courthouse for three days” after David’s rights were terminated.

The defense continued to argue that there was insufficient evidence to prove Linda Watson had been murdered. Linda’s skull, for example, showed “no indication of foul play,” and the gun used in Marilyn and Renee’s murders “was never found.” But Rosemary, who had initially provided an alibi for David, saying she was home with him during both the 2000 and the 2003 murders, recanted that testimony in 2007, when she and David divorced. The prosecution gave further weight to this fact, reminding the jury that Rosemary “went to a detective with the Pima County Sheriff’s Department and said her ex-husband was not at home during either of the incidents”–rendering her unreliable, since she had either lied to give David an alibi or was lying when she told detectives she was lying about the alibi.

The second time around, the prosecution’s argument worked. This past March, David Watson was found guilty on all three murder charges; in April, the 47-year-old was sentenced to a minimum 66 years in prison. Under Arizona’s sentencing guidelines, David has to serve 25 years for each of the two first-degree charges (Linda Watson and Marilyn Cox), plus 16 years on the second-degree charge (Renee Farnsworth) before he’ll be eligible for parole at the age of 113.

But at least one member of David’s family was dismayed by the ruling. Jordynn Watson, now 21, told Tucson News Now that her father is “an innocent man,” adding, “It’s truly sad that they’re putting an innocent man in prison and taking him away from his family and his children.”

“Secrets of the Desert,” the Dateline Linda Watson cold case episode, airs tonight at 9 on NBC.