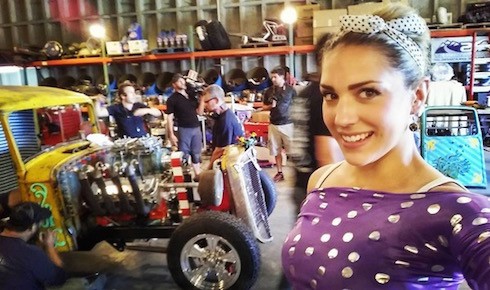 Thanks to Vegas Rat Rods 2017 cast newbie Cheyenne Ruether, we have an unexpected and intriguing sneak peek at the show’s Season 3 finale. Judging from the first such update Cheyenne shared, it looks (and feels) like the show is heading into Breaking Bad territory with some seriously isolated and potentially creepy desert action:

In unrelated (but still awesome) news, Cheyenne also recently harnessed the power of her growing social media presence to fire back at the haters she’s accrued simply by virtue of being a woman in a male-driven profession. It seems that Cheyenne, despite copious publicity in the run-up to her Vegas Rat Rods 2017 premiere, is still dealing with men who have a hard time believing that she might, potentially, be qualified to do her job.

Devoteés will recall that 25-year-old Cheyenne was actually working full-time in a body shop at the age of 16, meaning she’s spent over a third of her life doing what she loves for a living. But the Age of Cynicism is a very real thing indeed–so Cheyenne provided receipts for her haters, along with a wink and a few words of wisdom:

For all those that have s@%* talked & doubted my credentials in the trade; This post is for you ? Just looking back, thinking about how hard I've worked in life as a teen, then adult, and now as a mom…juggling so many jobs to chase my passions & get to where I am now. I know exactly what I want in life, and don't spread lies or bring others down in the process #earnednotgiven #realtalk #certified #twocareers #notimeforhaters #gotbetterthingstodo #doyourresearch #dramalovers You know my face, not my story

And, on top of all that, Cheyenne managed to squeeze in one final post that may or may not be related to the zombie topic of sexism in the workplace–but it’s a post that sure seems related nonetheless 😉

The Vegas Rat Rods 2017 finale is expected to air on June 25th, though that date hasn’t been confirmed by the network and could well change. In the meantime, keep up with the entire crew when the show airs Monday nights at 10 on Discovery.