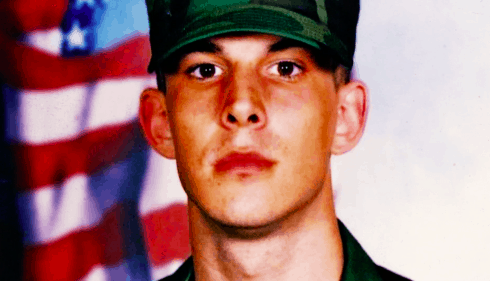 In 2012 father of five Srgt. Vincent Goslin returned safe from a tour in Afghanistan only to be murdered near his home. Tonight’s episode of Dateline, “Evil Was Waiting” investigates the story of who gunned him down on a dark Kentucky road.

Vince got out to check on the situation, and was brutally murdered – shot nine times. Jessie said Vince told her to drive away, so she took off in the car, leaving her husband to die on the side of the road.

Jessie called 911 and told police that her husband had been shot after trying to help a stranded motorist on the side of the road. Of course, it turned out that the random shooting had not been random after all.

Jessie had been cheating on Vince with boyfriend Jarred Long and instead of coming out with their affair and seeking a divorce, the love birds conspired to murder Vince. He had served two military tours for his country only to be murdered by his own wife.

The case took years to resolve as it was caught up in a cycle of appeals. This May (2018) Jessie Goslyn was sentenced to 22 1/2 years for complicity to murder in her husband’s death and Jarred Long was sentenced to 30 years for committing the murder. The case did not reach court, and both plead guilty to their charges. Goslyn said she had initially wanted to have domestic violence in her marriage to Vince Goslyn considered, but her lawyers advised her not to after hearing a statement read in court from Vince’s cousin Tim Hamilton

“Junior (Vincent Roslyn) was a husband, a father, a son, a brother, a nephew, a cousin and a soldier,” part of the statement said. “He may not have been perfect, but he worked tirelessly to provide for his family.” The statement also referenced the fact that he had been shot multiple times, essentially “overkill.”

DATELINE ‘Before Daylight’ Jesse Valencia was murdered by his cop boyfriend