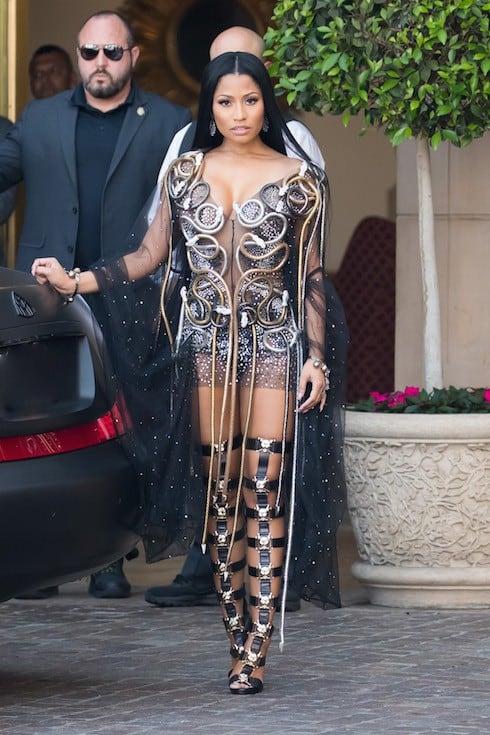 Nicki Minaj’s first performative foray came via a group called Hoodrats, a quartet that also featured Bowlegged Lou’s son Lou$tar, current Love & Hip Hop Hollywood star Safaree Samuels, and 7even Up. Nicki was only a member of the group for a few years, but her tenure featured at least one interesting non-musical experience: according to 7even Up’s recent interview with DJ Vlad, Nicki was the getaway driver for a robbery he pulled off–and her skill with the the wheel was undeniable, since the duo got away.

7even Up begins his tale by clearing up one misconception about the crime: namely, that he and Nicki had to go on the lam because they were wanted for attempted murder. “We did a robbery,” he says; “I did the robbery; she was the getaway girl.” How did he convince her to do the job? “She was a G, man! Nicki ain’t soft,” 7even explains, and goes on to say that he got the idea for the robbery when he spotted a heavily-jeweled fellow outside a club (someone he knew on sight, no less) and decided, on the spot, that he wanted to hold the man up. 7even didn’t have a gun, but “It was what it was”–meaning that he was willing to use simple, old-fashioned blunt force to get what he wanted. Nicki warned him–”You got two minutes”–7even did the deed and got chased back to the car, and Nicki sped off, “reckless,” into the night.

Here’s the VladTV interview featuring 7even Up’s story about Nicki. The explanation of the robbery and her role as the driver begins at about the 2:47 mark:

“We ran a red light and everything,” 7even laughed. He seemed to either not remember exactly how much loot he made off with, or didn’t want to remember, but the point he kept repeating is that the robbery was a success: “We got away.”

7even also didn’t volunteer how much of the loot he gave to his driver. But the good people at Forbes estimate that Nicki Minaj’s net worth from the last four years alone is approximately $85 million dollars. So if 7even’s interview somehow results in charges for the two of them, she can probably cover their bail.