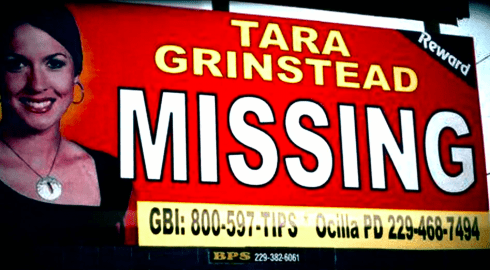 Tonight’s Dateline explores the gruesome October 2005 murder of a Georgia teacher and beauty queen that went unsolved for twelve years. The case remained cold until true crime podcast Up and Vanished stirred up interest about Tara Grinstead’s murder last year. Now two arrests have been made in connection with the crime.

Her body was not found at the time, and her best friend Maria Haber first thought that she had committed suicide because Tara had been going through a rough time emotionally. It was hard, however, to believe that Tara had killed herself because of the presence of a white latex glove in her yard.

More than a decade later two of Tara Grinstead’s former students, Ryan Alexander Duke and Bo Dukes, were arrested in her death. Chillingly, there are court documents that indicate authorities were notified within weeks of Tara’s disappearance that both of these men admitted to someone at a party that they had killed Tara and burned her body.

Dukes and Duke are still awaiting trial. Their attorney recently filed a motion asking charges to be dropped because it took so long to arrest them. It should be noted that the crime of murder does not have a statue of limitations in any state in the U.S.