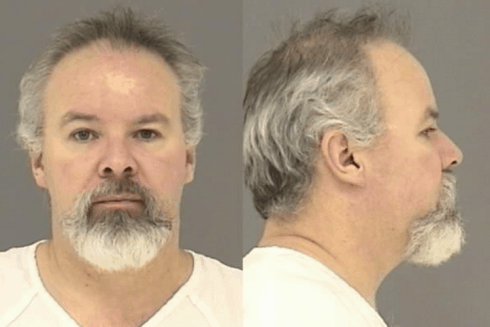 Tonight’s Dateline episode, “A Deal with the Devil,” is a truly chilling tale. Scott Kimball had been released early from prison in order to be an informant for the FBI. He told the federal agents that his cellmate Steve Ennis was trying to get him to kill a witness in his drug case. But within a month of his release, Scott committed multiple murders across multiple states. He’s suspected of killing up to 21 people, and has confessed to killing four people in a 147-page letter to his family.

Kimball, who’s been dubbed “Hannibal Lector” for his similarities to the Silence of the Lambs character, confessed to killing Kaysi McLeod (10), Jennifer Marcum (25), LeAnn Emry (24), and his uncle, Terry Kimball (60), in 2011. Kimball was already in prison for two counts of murder at the the time. And, in a shocking connection with his later cellmate, one of Kimball’s victims — Jennifer Marcum — was Steve Ennis’ girlfriend at the time of her murder.

After his confession, Kimball was re-sentenced to 70 years for the four murders, along with 48 years for fraud, and 70 months for a federal gun charge. Just last October, Kimball tried to murder someone in prison during an attempted escape.

According to Scott’s cousin Ed Coet, who wrote a book about the murders, Scott is currently concerned with his soul’s salvation because he “does not want to go to hell when he dies.”

On tonight’s episode of Dateline, host Keith Morrison revealed that authorities have evidence connecting Scott to the death of 26-year-old Catrina Powell. Beyond that, authorities also believe Scott may have murdered an unidentified woman — known as the “maiden water victim” — who was found dead in Utah in 1998.

Dateline tried to arrange an interview with Kimball, but ultimately decided not to follow through with it after Kimball made unreasonable demands and tried to “play games” with the producers.

Kimball’s case got so complicated and big that Lafayette Police Detective Gary Thatcher says the officers in charge of it called it “Operation Snowball.” Kimball’s case began with a series of bad checks Kimball wrote…but detectives soon uncovered a trail of deadly crimes leading them to Kimball himself.

PHOTOS Tiona Rodriguez, teen mom who shoplifted at Victoria’s Secret with dead newborn in her bag, gets 16 years