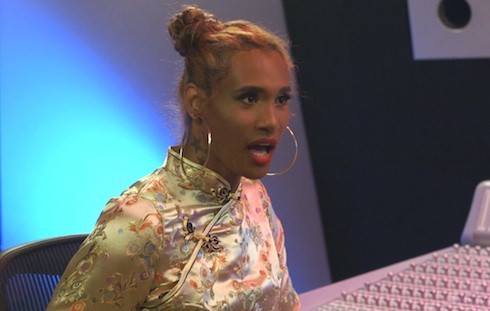 Twelve weeks after her Love & Hip Hop Atlanta debut, a look at D. Smith before and after the show reveals a fierce personality that has divided fans of the hugely popular VH1 series. Smith’s willingness to stand up for what she believes without relent has rubbed several of her fellow cast members the wrong way, and stirred up debate among viewers about the limits of the show’s drama.

D. Smith before Love & Hip Hop Atlanta appeared, to many observers, to be a completely different person. In fact, you might even argue that her real introduction to the people who would soon be watching her on TV came via an Instagram update in which she described herself and her transition in heartfelt, earnest terms. The post quickly went viral, and it’s easy to see why:

A lot of people loved the person on the left but, this person was put together with bits and pieces of what society wanted. This person was so far gone in satisfying everyone else, that one started to loose touch with one’s true authentic self. That person use to be me! I’ve judged people for being who they were. I was angry and insecure. I dated beautiful girls. When I say beautiful, I mean BEAUTIFUL girls that I cheated on with men because I couldn’t fight my deep feelings for them. Afraid of loosing or disappointing my family and friends, I lived a terrible lie. I’ve hurt so many people because of this. My career. OMG my career! ? The church, going to the gym, selling music, the money and most importantly, my life. I could loose it all. To be honest, I’m ashamed of the person I use to be. To think, I’m not the only one with this story… Hello, I am D. Smith. That sexy, fearless and last but not least, genius ? woman on the right is me! I am officially 1year and 6 months into my transition. With that being said, for the first time in my life I am honest. Not only to myself, but to the world around me. I have nothing to hide, which leaves me no choice but to live free. Now I don’t have to worry about hiding in the shadows of a lie and feeling that horrible feeling when I hurt someone that I truly care about. This message isn’t an attempt for acceptance and to be quite frank with you MF’s, I don’t give a fuck! Lol. I wrote this because I am no longer hiding! I am a PROUD Trans Woman!!!!!?? #transisbeautiful #love #me #trans #new #beforeandafter #2016 #God #blessed #pride #girlslikeus #fashion #lgbt #power #all #beautifulpeople #us #now #fashion #face #music #happy #finally

Smith also won praise for standing up to Lil Scrappy after he shared some less-than-enlightened thoughts about the transgender community in the weeks leading up to LHHATL‘s Season 5 premiere. As we reported, when Momma Dee got involved in the conversation, things threatened to turn into a war of words, but Smith’s levelheaded, strong stance won her Momma Dee’s respect, and Scrappy eventually backed down, as well.

Things haven’t been so calm in recent weeks, though, thanks to Smith’s storyline involving an anti-bullying campaign run by Deb Antney. Deb’s son Waka Flocka Flame also had some words for transgender people in general and Caitlyn Jenner in particular, saying last year that he believes “transgender people are controlled by Satan” and that Jenner was “rebuking God” and falling victim to “the devil playing tricks on [her] mind.”

For her part, Deb offered an olive branch to Smith, in the form of participation on an anti-bullying panel aimed partly at LGBT youth. Once Waka’s words came up, though, and Deb tried to defend her son, tempers exploded–and continued to do so when the by-now-infamous panel finally convened:

“This is not the time or the place for D and Tammy and [their] drama,” said Deb, in the wake of the fight; after the episode aired, she went even farther, telling VH1 that “the trans community doesn’t need D. Smith” because “D. Smith is an a$$hole–period.”

Deb went even farther than that in the interview:

D. Smith got [her] own issues [and] it has nothing to do with anybody else’s issues. I just happen to be in D. Smith’s world for that few minutes. I chose to hop my a— up out of there too. D. Smith’s stuff is bigger than me and I’m not gonna have nobody for two seconds or three seconds on a TV screen prejudge my children and how we’re raised and our beliefs and what we think about and any of the rest of the things. I don’t care how people live their life. I love everybody. I don’t care who you are, what you are, what you choose to be in your life but just don’t be mad at me if I’m not with some things. Don’t be upset with me. Unfortunately D. Smith just kinda barked up the wrong tree because we don’t have phobias. I don’t really care how people choose to live their life, but when you try to make me, and force it to fit with me, then it becomes a problem. Now it’s a problem. I’m gonna respect you like you respect me. It’s simple as that.

Thanks to that scene, at least one high-profile commentator has “officially quit Team D. Smith.” Judging by general LHHATL fan commentary, it looks like many of the show’s viewers agree. What do you think: Is D. Smith a determined transgender woman trying to make things better for her community; an attention seeker who wants nothing more than to be on television; or something else entirely?