The reality TV grind stops for no one, but especially not when you’ve been cast in one of the most popular survival shows on air. Leftfield Entertainment, the production company responsible for History’s hit Alone, has already confirmed Alone Season 6 well in advance of any official word from the network — and before Season 5 has even finished airing.

Here’s everything we know about the next season of the show so far.

The Alone Season 5 winner may have been prematurely revealed well in advance of the season finale. But the show’s return to form after a controversial Season 4 has been well-received by fans, and got an added boost by offering former contestants a chance to come back on and try again under the “Redemption” heading.

Practically speaking, having already-vetted survivalists and outdoorspeople back on gave the show’s production more time to prep for Alone Season 6. Which is why back in early February, Heather Briggs, Senior Director of Casting & Talent at Leftfield’s parent company ITV, shared the first Season 6 casting call: 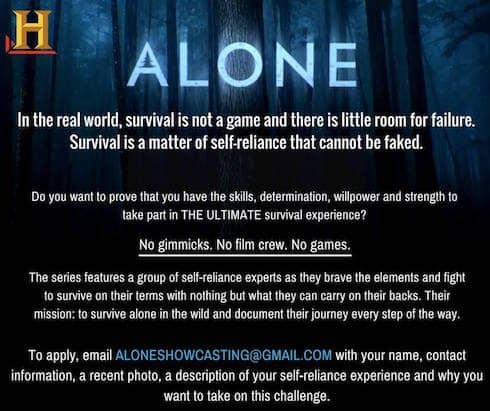 It wasn’t long after that the first reports from potential Season 6 cast members began to surface. By April, at least one redditor claimed he’d had an extensive phone interview with a producer, and said he’d been told that the production crew expected to begin boot camp for the new cast members by June. (In other words, two months ago.)

By July, Heather Briggs announced that ITV had finished assembling the Alone Season 6 cast. Embedded in Heather’s announcement was the suggestion that people interested in being on the show would get another chance to apply very soon:

We’ve completed our current casting period for Alone. In the meantime, if you’re looking to apply for the next season, please note that our email address has changed to alonecasting@itv.com
When applying, please include your full name, age, location, contact information, link to your social media page, brief paragraph about you and a few photos. We also encourage you to start working on self-shot survival footage showcasing your survival skills ahead of time – this is a key component to be considered for this series. Hold onto your footage and you can send to us once we start up casting again. Thanks!!

(It’s also worth pointing out that filming for the current season of Alone began almost exactly one year ago from the time of this writing. If the Season 6 cast was ready to go by July of 2018, it sounds like that production may be ahead of last year’s schedule.)

Further supporting the notion of a passive Alone Season 7 renewal is the strong ratings for the new episodes airing now. For example, “Slayer II,” last week’s episode, drew an audience of 1.35 million viewers, making it the 13th most-watched show in all of cable TV that night. And Season 5’s ratings overall are consistent with what the show has drawn in the past.

If you’re really interested in being on Alone, here’s some advice from an expert

Alone is probably the most challenging show in its genre. Getting even a quick look from its producers requires significant experience and technical know-how, to say nothing of general camera friendliness.

Fortunately, a savior has descended for the challenge-minded among you. Season 3 winner Zachary Fowler — who still holds the show’s all-time endurance record, having made it 87 days in Patagonia — recently gave an in-depth interview in which he explains some strategies you might consider for getting on the show. (Plus, if Alone is too daunting, Zach claims his tips will also work for Naked and Afraid.)