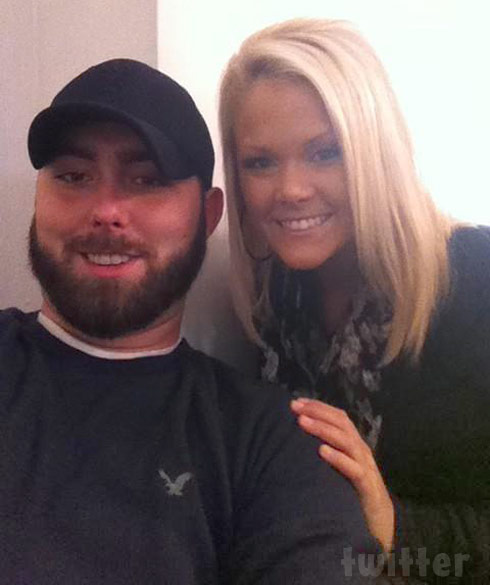 There was a huge, collective gasp in the Teen Mom 2niverse last night when Dr. Drew pressured Leah Calvert into shared something that the MTV cameras missed and she hesitantly revealed that her ex Corey Simms cheated on his now-wife Miranda after the couple first started dating — something he allegedly revealed in texts to Leah saying he missed his family, etc. Miranda, who usually doesn’t engage too much with her hubby’s on-screen drama, must have know what was coming because she shared some preemptive tweets as well as some more messages after the show aired.

“Don’t believe everything you hear,” she wrote yesterday before retweeting a follower’s comment, “People wanna steal others happiness.”

Another fan encouraged Miranda by writing, “girl you are beautiful and you and your husband are perfect together :)” to which Miranda responded by tweeting, “Thank you, he is my everything :)” Miranda then retweeted a response to her comment that read, “That is all that matters! There will always be rumors and gossip. Pay them no mind . good luck to you and your family…”

Last night Miranda returned and wrote, “Love this life God has created for me. So excited about the future that he has planned for me & my Husband and our family! #Loved #Blessed #Thankful”

Earlier today she added, “Who you are is who you trust” and then “Make sure your hands are clean before pointing your finger.”

So what has Corey’s reaction been? Assuming that lengthy conversations about the awesomeness of red skittles is not a veiled metaphor of some kind, the only thing Corey has said about the matter is the brief tweet, “Opinions are like butt holes…….everyone has one……” (That actually sounds like a comment about the reactions from Leah’s comments as opposed to her comments themselves.)

Leah has also remained relatively quiet on the matter, sharing only one vague tweet that might be in reference to her comments on the show:

There has to be some kind of context behind something someone says. With that being said look up the word editing.

I don’t think Leah really needed to mention anything about what Corey did or didn’t say about Miranda that wasn’t on film, but in her defense, Dr. Drew was pressing her pretty hard, even after it was obvious that the information was going to be personal in nature.

In the end, it seems like Corey, Miranda and Leah have moved on, so I guess we should too. 🙂 Besides, we’ll have lots more to talk about after the Teen Mom 2 Reunion Part 2 next week!!!

Jenelle Eason will not be at the Teen Mom 2 Reunion, NYC balloon massacre avoided