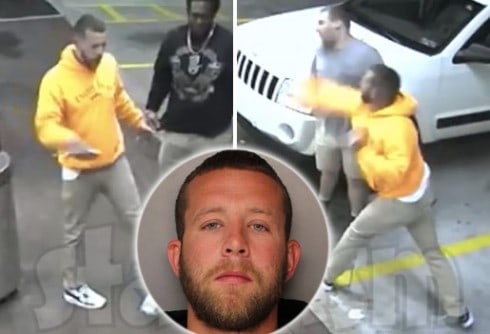 Police in Pennsylvania are on the hunt for a culprit who was caught on camera mocking and then sucker punching a man with cerebral palsy.

The Chester County District Attorney released the impossibly offensive video of the May 10 incident that was captured by security cameras at a West Chester, Pennsylvania gas station.

Watch as the attacker, later identified as 29-year-old Barry Baker, relentlessly mocks and then punches the man with cerebral palsy for no reason:

Baker was found, arrested on May 22 and charged with assault. His bail was set at 10% of $25,000 which he posted. Now Baker, who became public enemy number one online after the story and video circulated, is wanted by multiple law enforcement agencies.

The West Chester Patch reports that warrants have been issued for Baker after he failed to appear for charges stemming from this assault AND a seperate hearing for a domestic relations matter.

The Mercury revealed that Baker, who owned a lawn service company that got hammered with brutal reviews via Yelp by people angered over his assault, has a lengthy criminal history that included desecration charges after he stole more than 200 military flag holders from the graves of military veterans at two separate churches and sold them to a scrapyard for cash.