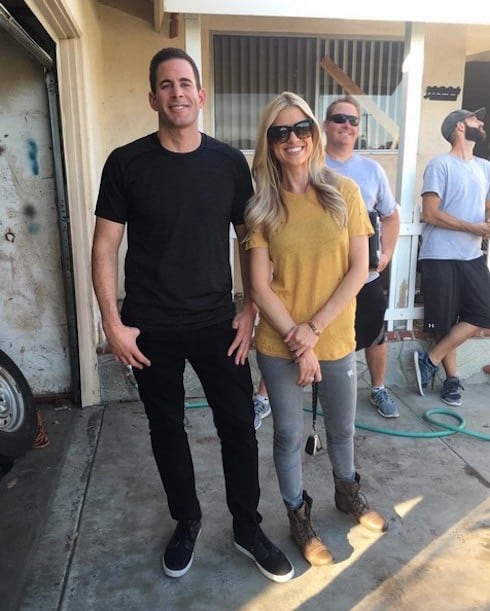 The brief attempt at reconciliation for Flip or Flop‘s star couple is over, now that reps for the pair have confirmed that Tarek and Christina El Moussa are getting a divorce. Things apparently went sour for Tarek and Christina earlier this year, and they separated following a May 2016 incident involving a screaming match and Tarek stalking out of the El Moussas’ Orange County house with a firearm. Since then, Christina has been involved with Gary Anderson, a contractor who worked with she and Tarek on Flip or Flop, and Tarek fired his kids’ nanny so they could sleep together responsibly.

Initial reports suggested that Tarek and Christina would try to make things work, in large part because they share a huge business empire and are the stars of the second-most-popular show on HGTV. However, they’ve since announced the filing of formal divorce paperwork, so it looks like rumors of Flip or Flop‘s demise are about to become reality.

Raising even more eyebrows among fans, however, is the news that apparently Tarek is seeking spousal support from Christina. TMZ has reported as much; according to their article, “[Tarek] wants [Christina] to pay him spousal support but wants the judge to block any move she makes to collect it from him.”

The move has raised eyebrows among fans, since both of the El Moussas are licensed real estate agents and are presumed to have an equal split in their business. So the request may be nothing more than a power move on Tarek’s part. And at least one anonymous source thinks that the lure of money is going to be the glue that keeps the two of them working together, even if they’re no longer a couple: “It’s civilized, or as best it can be under the circumstances. They have to make it work if they want to continue monetizing what they do.”

Other than what they’ve said through their reps, neither Tarek nor Christina have made any public statements about their split. However, Christina alluded to the divorce news in her most recent Instagram post, while also making it clear that her first priority is her children:

And Tarek has been doing the same with his social media posts, even going so far as to tag Christina whenever they involve the pair’s kids:

#Dancing with the #stars… No #dancing with my #stars!! Nothing like coming #home to these two. #luckiest man #alive❤️❤️❤️@christinaelmoussa

#tickle time before #bedtime!!! This boy melts my heart when he #giggles!! Cutest little #monkey ever!!!!!❤️❤️

No word yet on what comes next for the Flip or Flop couple, whose show is expected to shutter production later this year. For now, though, new episodes of Flip or Flop air Thursday nights at 9 on HGTV.

(Photo credits: Tarek and Christina El Moussa are getting a divorce via Instagram)