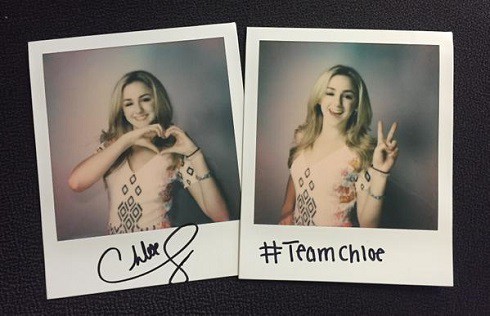 The explosive drama on season 4 of Dance Moms left viewers reeling…and Abby Lee Miller without three of her dancers. While off-screen courtroom drama has kept former cast member Paige Hyland and her mother Kelly in headlines in recent months, former dancer Chloe Lukasiak has remained mostly out of the spotlight…until now!

During the season 4 finale, Chloe and her mom Christi left the Abby Lee Dance Company for good. After seasons of what she called “bullying” by the dance instructor, Christi put her foot down and walked out when Abby referred to Chloe as “washed up.” The end-of-season reunion show was the Lukasiaks’ last appearance on the show, and according to Christi, the last time they stepped foot in Abby’s studio.

Since leaving Dance Moms and the ALDC, Chloe and Christi have spent time traveling around the United States and Europe for press tours and meet and greet sessions. In January, Chloe announced to fans on her YouTube channel that she was working with a new studio, Studio 19 Dance Complex.

On Monday, Chloe took to Twitter to share a group photo of her team at a dance competition, along with the hashtag #nationalchamps, indicating that Studio 19 took home a big win.

Congratulations studio 19 on an amazing nationals! Thank you for everything 🙂 #nationalchamps ??❤️ pic.twitter.com/mbiwgc6V2h

In the months since she left the show, Chloe has modeled dancewear for the Just for Kix catalog and was a cover model for Nation-Alist Magazine. She was also featured showing off her talents in a Bianca Ryan music video for the song Alice.

Even though Chloe has left the team, the rest of the ALDC dancers can be seen on Dance Moms, airing Tuesdays at 9/8c on Lifetime.