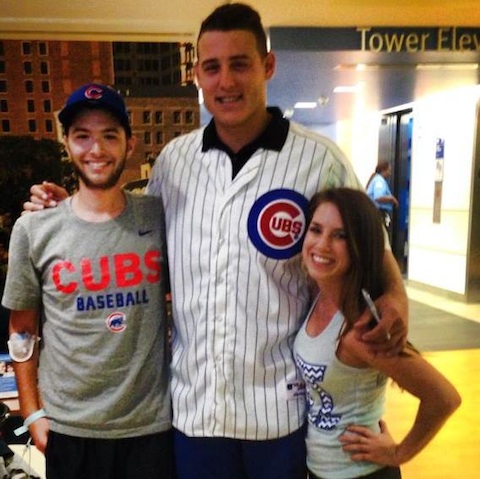 Chicago Cubs first baseman Anthony Rizzo is the current National League leader in home runs, so it makes sense that people ask him to hit home runs for them.

On Tuesday, the request came from then-21-year-old Mike Kasallis, who is currently a resident of the Ann and Robert H. Lurie Children’s Hospital in Chicago. Mike is battling leukemia.

Rizzo makes a monthly visit to the hospital, and he sat and chatted with Kasallis, his girlfriend, and his mother. Kasallis is a “huge Cubs fan,” and asked if Rizzo could hit a home run for him in the next game.

Rizzo said he “didn’t exactly promise” he would, but said he’d try. It turns out he was just being modest:

Rizzo has a very personal reason for making his monthly visit to the cancer ward: he was diagnosed with Hodgkin’s lymphoma in 2008. Thanks to aggressive chemotherapy, his treatment was successful.