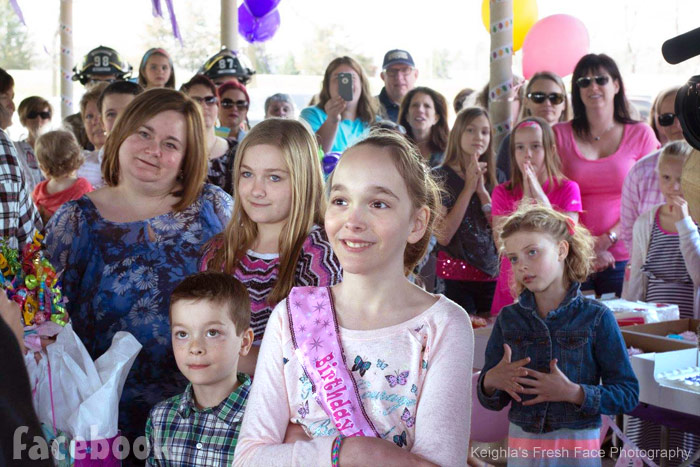 In a heaping, helping dose of feel-good news, 10-year-old Mackenzie Moretter of Shakopee, Minnesota had a HUGE birthday bash yesterday with over 300 attendees. That may not seem all that newsworthy, but just one day before her mother issued a Facebook plea after everyone initially invited to Mackenzie’s party declined to attend.

Mackenzie suffers from the rare genetic disorder called Sotos Syndrome. Her father, Matthew Moretter, says doctors diagnosed her after discovering a tumor fused to her spine. “It causes gigantism where kids grow at a faster pace. So Mackenzie is a lot taller than other classmates,” Matthew explains. “Kids are friendly to her, but she doesn’t have friends. No one calls and talks to her. I’ll show up at her school and she will be playing alone.”

So after no one RSVPed to Mackenzie’s birthday party, her mom Jenny Moretter posted this message on Facebook in hopes of getting maybe ten or so people to attend:

Hello moms. I’m writing because I have a beautiful daughter named Mackenzie who is turning 10. I recently invited several girls to her birthday party this Saturday. I got cancellations or no calls at all saying whether they’re coming or not. My daughter has Sotos Syndrome which means she has development delays such as speech and learning. At school she struggles and is often alone on the playground. As a mother, it is heartbreaking being you want your children to be happy. I’m reaching out to moms who have daughters between the age of 9-11 that would love to come to a birthday party tomorrow from 11-1:30. You don’t have to bring gifts or stay long, just stop by and wish her a happy birthday. As of now, I have two girls coming which is family. She would be so surprised to have other girls just show up. If you are interested please send me a pm and I’ll give you my address. Thank you all for reading a mother’s wish!

The response to Jenny’s plea was overwhelming, and soon an event page was created and even a GoFundMe page to try to cover the expenses of a party that now looked to have hundreds of guests! Donations poured in and local businesses donated food and equipment and the result was one happy little girl (and a tearful mother).

Mackenzie wore a shirt with the message “Have courage and be kind” and she spoke to those in attendance. “I have a hard time making friends in school, but thanks to all of you … my voice was heard,” she said. “I love you all.”

The Mayor of Shakopee even declared Saturday to be Mackenzie Moretter Day:

A BIG thank you from our family…

From the moment Mackenzie has been born, she’s made a unique mark on the world. She’s been a light to everyone that knows her.

This is why in planning her party, I was so taken aback when individuals didn’t RSVP. As a mother, I was heartbroken for my daughter. I see a side of Mackenzie the rest of the world may not be privy to- she’s intelligent and thoughtful, courageous and kind. Mackenzie was deserving of one, special birthday.

That’s the reason I reached out to the Minnesota community to help. The outpouring of support for Mackenzie and our family has been humbling. We are truly, truly thankful for your kindness.

On Saturday, you changed the life of a little girl that many of you have never met. And, you’ve given this mother purpose to spread a message of acceptance, tolerance and love, beyond just our home.

She also provided a link to a statement from the team that helped put the party together on such short notice. Here’s that statement:

Paul, Darren, Nicole and I are simply a group of Facebook and Twitter friends. When we heard the news spread on social media, we each took a role in orchestrating the event. However, it was truly the community that made Mackenzie’s birthday so successful.

The Minneapolis/St. Paul community is like no other. From Shakopee Mayor Brad Tabke, to local businesses and city council officials, the event was filled with love, simply because every individual that touched the planning, did so with care, love and concern for Mackenzie’s family- making sure the family felt safe and supported.

The additional funds are going towards creating good in the community. The family has requested that some of the funds go towards the Sotos Syndrome Foundation, which is the organization behind spreading awareness behind the type of syndrome Mackenzie has. Since we exceeded our original goal, we have a few meetings coming up to decide how we can help other children as well. We never imagined one single event would have this reach. We’re proud to ignite the conversation around making sure EACH AND EVERY child feels loved and cared about on their special day. Planning a party in under 12 hours was a monumental task, but creating thoughtful dialogue about where the additional funds should go is taking longer- as it should. We want to represent the community’s wishes and those of the family, in exactly the right way.

What struck me most, is this wasn’t the effort of simply the four of us: It was the community as a whole, coming together for one, incredible little girl. Mackenzie is an individual with Sotos Syndrome, but that is not all she is- she is caring, funny, beautiful, and more eloquent than you could ever imagine. While this event was for Mackenzie, we constantly heard from over 450+ party goers and thousands of people on her event page, that THEY were truly touched. And, so were we.

Hundreds of pictures are available here and here.