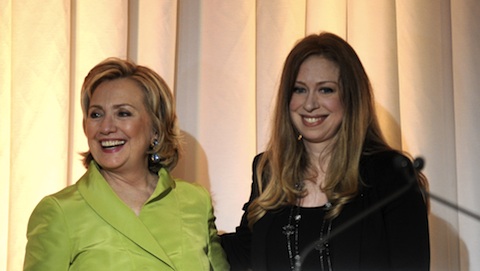 Chelsea Clinton is a mom. And Bill and Hillary? They’re now grandparents.

And they announced her birth very briefly and lovingly on Chelsea’s Facebook page:

Marc and I are full of love, awe and gratitude as we celebrate the birth of our daughter, Charlotte Clinton Mezvinsky.

According to Clinton spokeswoman Kamyl Bazbaz, Charlotte was indeed born on Friday night. She did not provide further details, nor have the Clintons yet made a public statement.

Chelsea was out supporting her numerous causes as recently as this week, presenting at the annual Clinton Global Citizen Awards on Sunday.

No official baby photos yet, but keep your eyes peeled. Once they’re out there? We’ll hit you up.