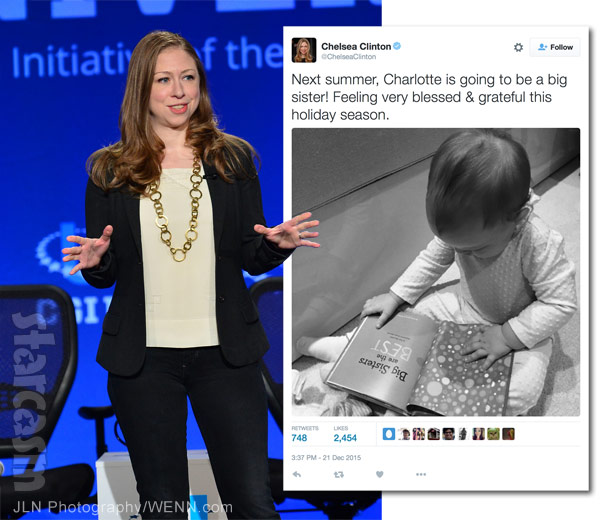 Presidential candidate Hillary Clinton can add yet another item to her hectic life over the next twelve months: a new grandchild! Chelsea Clinton just shared the news on Twitter that she is expecting her second child with husband Marc Mezvinsky!

Chelsea tweeted a photo of her 15-month-old daughter Charlotte and wrote, “Next summer, Charlotte is going to be a big sister! Feeling very blessed & grateful this holiday season.” Here’s the tweet and the photo:

Next summer, Charlotte is going to be a big sister! Feeling very blessed & grateful this holiday season. pic.twitter.com/gpCGqcmeCq

Hillary Clinton demonstrated to her constituents that she is a hip grandma by quickly responding to the announcement with her own tweet:

Your dad and I could not be happier for you, Marc, and Charlotte. We’re so excited to meet our second grandchild! -H https://t.co/hgTr07HBlr

And Grandpa Bill was not far behind:

Christmas comes early! @HillaryClinton and I are thrilled for Chelsea, Marc and Charlotte’s growing family in 2016! https://t.co/D1zCrrzXa2

Congratulations to Chelsea and Marc! Perhaps we will see Charlotte and her newborn sibling on the campaign trail next fall. 😉 (Babies get votes y’all!)