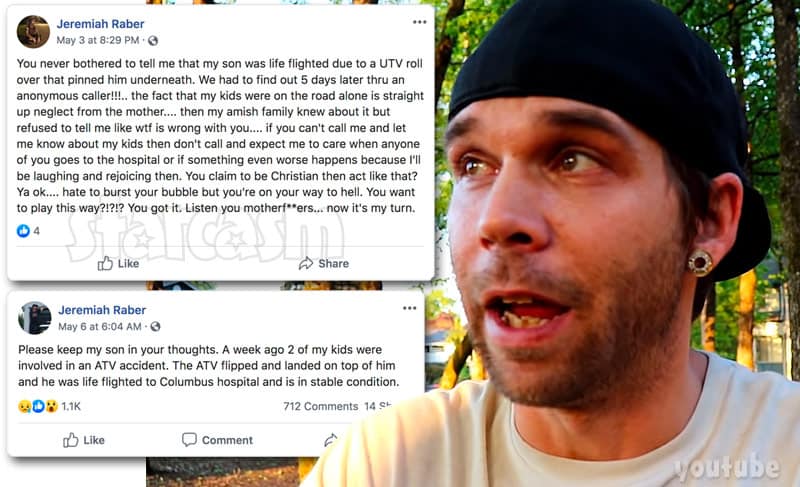 Breaking Amish and Return To Amish star Jeremiah Raber shared some startling news last week as he revealed two of his children were involved in an ATV accident and his son had to be taken to the hospital via Life Flight.

Jeremiah first shared information in a Facebook post on May 3. In the post, Jeremiah was enraged as he claims that he didn’t know about the accident until almost a week after it happened — and that was only because of an anonymous phone call. Here is Jeremiah’s full post:

You never bothered to tell me that my son was life flighted due to a UTV roll over that pinned him underneath. We had to find out 5 days later thru an anonymous caller!!!.. the fact that my kids were on the road alone is straight up neglect from the mother…. then my amish family knew about it but refused to tell me like wtf is wrong with you…. if you can’t call me and let me know about my kids then don’t call and expect me to care when anyone of you goes to the hospital or if something even worse happens because I’ll be laughing and rejoicing then. You claim to be Christian then act like that? Ya ok…. hate to burst your bubble but you’re on your way to hell. You want to play this way?!?!? You got it. Listen you motherf**ers… now it’s my turn.

Three days later, Jeremiah followed up with a less irate post on his Facebook fan page. “Please keep my son in your thoughts,” Jeremiah wrote on May 6. “A week ago 2 of my kids were involved in an ATV accident. The ATV flipped and landed on top of him and he was life flighted to Columbus hospital and is in stable condition.”

Jeremiah shared another update via a YouTube video on Friday (included below), and the news is positive. “As of right now he’s doing pretty good, and he actually just came home,” he revealed. “I just thank everyone of you guys that had us in your thoughts and prayers and sent by positive vibes,” he added. “That really meant a lot.”

It’s great to hear that Jeremiah’s son is back home! We certainly wish him a speedy recovery.

Fans of the Breaking Amish and Return To Amish may not know a lot about Jeremiah’s children because they have only appeared briefly throughout the entire run of the shows. Jeremiah has two daughters and one son who live with their mother, Jeremiah’s ex-wife Naomi Stutzman, in Ohio.

Here is a screen cap from one the few times Jeremiah’s kids were featured on TLC: 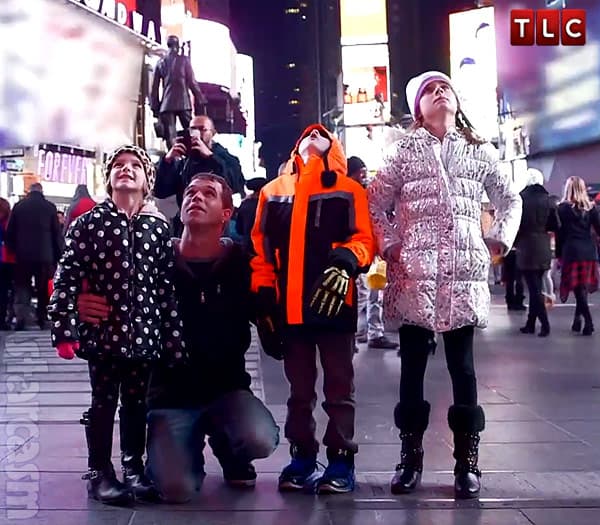 As we reported earlier this year, Jeremiah and Naomi don’t exactly have the best co-parenting relationship — due in part to Jeremiah allegedly owing more than $10,000 in back child support. There was an updated post online from April that indicated Jeremiah’s past due amount had exceeded $15,500 at that time.

In mid-April, Jeremiah posted a photo of a recent summons for Naomi for allegedly failing to comply with an order from the juvenile court. “Mrs. Innocent not so innocent anymore???,” he captioned the picture. The Plaintiff in the case is not Jeremiah, and it is unclear from the photo what Naomi was being accused of not complying with.

As far as Jeremiah’s most recent wife, it’s unclear whether or not Jeremiah and Carmela are still together. It’s also unclear exactly where Jeremiah was when he recorded the video below. His most recent known whereabouts was Florida, where he was recently involved in an accident of his own.

Jeremiah was traveling with friends in a pickup carrying a large camper trailer in Lake City, Florida last month when they were hit by a driver who ran a red light. His video from Friday actually began with an update on his own condition after that accident.

“Just thought I would come on here and let you guys know that I am actually getting treatments done,” he said. “I am going through quite a bit of stuff. My neck is messed up, my lower back — I have a disc that pokes way back. And also I have a fracture. So yeah, it’s not a good feeling. It’s very, very sore and I actually go see the doctor three times a week on this.” He concluded his own update on a positive note by assuring everyone “we’ll work our way through this.”

Here is the full video from Jeremiah updating on his own health and his son’s:

If you want to keep updated on Jeremiah, and also receive some very personalized swag from him (and Carmela?), then you can head on over to Patreon and sign up to send him money every month. The monthly donation incentives start at just $5 a month, which gets you a shout out on a video. The top “Raber family ultimate level” tier is for pledging $250 a month, and that will get you all of the following:

You’ll be added to the private facebook group where you get to interact with us on a more personal level.

You will get a shout out on one of the videos.

Your name will be in the credits of every video.

You receive a hand written letter from us once a month.

You get a personal call from us.

You receive a signed shirt from us once a month.

TLC gives Breaking Amish’s Mary Schmucker iTunes gift card, Mary: ‘I have no use for it’