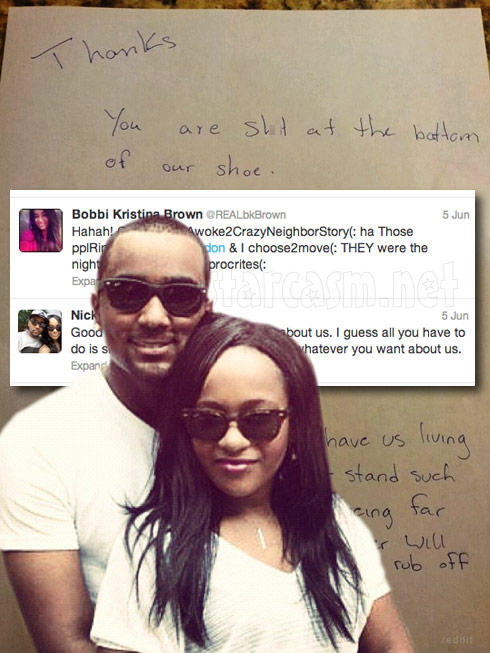 We shared a photo yesterday of a handwritten letter allegedly penned by Whitney Houston’s daughter Bobbi Kristina Brown and her adopted brother/fiance Nick Gordon after they were evicted from their Alpharetta, Georgia apartment complex. The note was reportedly left on the door of the couple’s neighbors (who had reported Bobbi and Nick for noise complaints on several occasions) and contained such angry words as, “you are sh!t at the bottom of our shoe” and “you are a miserable couple, and always will be.”

At the time of our post about the letter, there has been no response from either Bobbi or Nick about the letter or their eviction, but both took to Twitter soon after and clarified their side of the story: 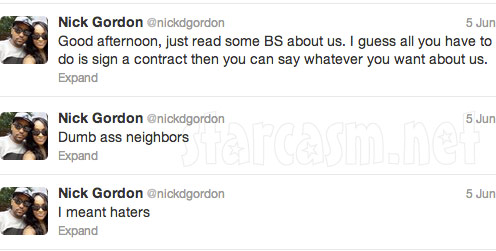 As for Bobbi Kristina and Nick Gordon’s neighbors, which is reportedly a couple with a one-year-old child, one of them filed an official police report after receiving the letter left on his door! Josh Morse took the letter to to the Alpharetta Police Department where they filed a report, quoting the letter that was posted yesterday exactly.

According to the police report, obtained by TMZ … Josh wanted the incident documented “due to the ongoing issues he has been having with the couple.” The site then added, “As we previously reported, Morse and his wife had filed more than 10 noise complaints against Bobbi and her BF Nick Gordon — claiming they were the neighbors from hell.”

Meanwhile, a rep for Bobbi Kristina tells E! News that they weren’t evicted but left voluntarily. Another source tells E! that “Bobbi felt that the neighbors were always in her business and looking to get some sort of media attention.” She then adds, “Krissy lives on the 2nd floor and as with anyone who lives in a first floor apartment you should expect to hear some noise above you. But apparently these people have been nuts for a long time. So she decided to move out. She was not evicted.”

11Alive did a little research and discovered that there were records of four separate instances in which officers were called to Bobbi Kristina and Nick’s apartment since they moved in. Also, animal control records indicate that after the couple moved out another neighbor contacted animal services because “an abandoned dog was left in the apartment after moving out.”

The report says the small Yorkie had been out on the porch in hot sun since 10:00 that morning. The call to animal control was made around 6:00 p.m. The dog was picked up before animal control officers had a chance to respond.

I assume that is the same Yorkie that Nick purchased for Bobbi Kristina back in November that I believe is named Kyzer. Here’s a photo from Bobbi Kristina’s instagram of her and little Kyzer: 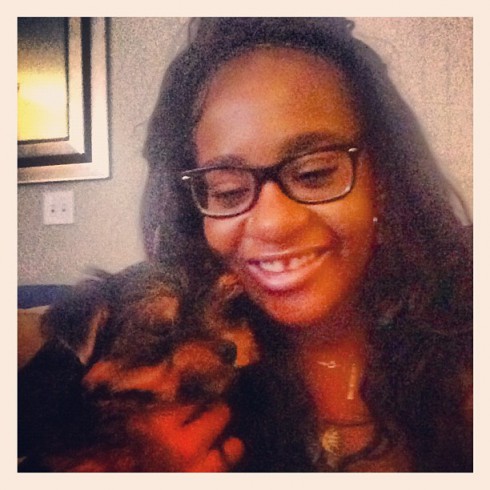 Awwwwww! They better not have left little Kyzer behind!