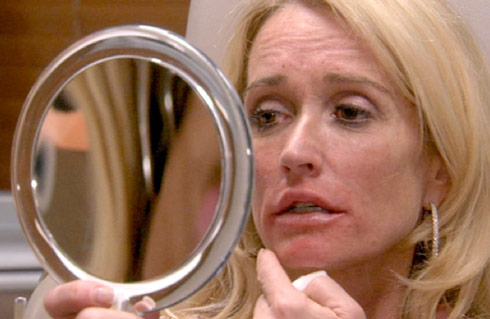 Real Housewives of Beverly Hills cast member Kim Richards has entered rehab according to E. Rumor Fix has added that Kim is staying at Betty Ford in Palm Springs. The 30 day program is estimated to cost $27,000.

If you’re a fan of the show than you’ll instantly be reminded of the fireworks from last year’s season finale when Kim’s own sister and fellow Housewife Kyle Richards accused her of being an alcoholic. This scene played out in a limo after celebrating Taylor Armstrong’s 39th birthday party.

“You are a liar, and sick, and alcoholic. You are an alcoholic. That’s right. I said it and everybody knows.”

During this season’s run it seems as if Kim has only gotten worse. As we previously reported, she revealed that she was on a cocktail of various prescription medications including Lexapro, Trazadone and Topamax.

This isn’t Kim’s first attempt at rehab as it was revealed at the end of the explosive limo fight episode from last year that:

“Kim’s family checked her into rehab . . . A week later, she checked herself out. She is taking her life one day at a time.”

Rumors are already circulating that Kim, a former child actor, is doing this so that Bravo will not dismiss her from the show. I think we can all agree that at this time the show is not relevant. What is important is Kim’s health and happiness and we’re hoping that this time she’ll get the assistance she needs.