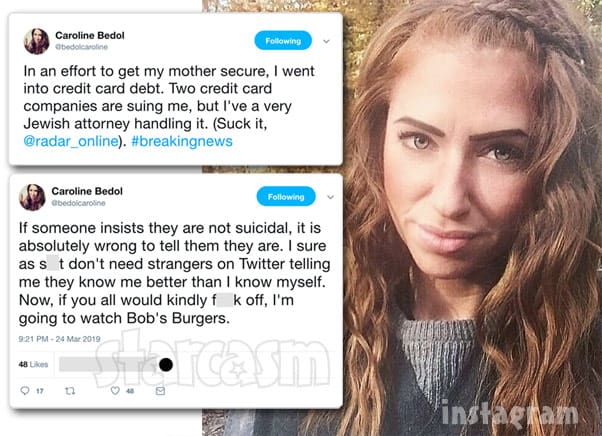 Former Below Deck third stew Caroline Bedol had quite the dramatic story line last season, culminating in her quitting after an epic confrontation with chief stew Kate Chastain and second stew Josiah Carter. The drama continued for Caroline after she left the show, including her marathon Twitter meltdown throwing her former co-stars under the boat, being homeless, calling into Watch What Happens Live! under another name in order to confront Captain Lee, and having the police called for a welfare check by a stranger on Twitter who thought Caroline was suicidal.

Caroline has remained very active on social media, including numerous Instagram live sessions over the past few weeks. She has mentioned several times that she is “homeless,” and has posted at least one photo from a hotel she was staying at with her emotional support dog Rico. Caroline recently spoke with Radar Online and confirms that she is technically homeless, but it’s not as bad as it may sound.

“I’m not looking for a homeless shelter to stay in, but I am homeless in the sense that I am in between homes,” Caroline reveals. She says that she’s not bothered when people refer to her as “homeless,” before further clarifying her situation: “I’m not sure where I’m going to be landing geographically,” she says. “You get motels or hotels when you can, you sleep in your car if it’s warm.”

After the article was published, Caroline responded with an almost compliment. “Well done Radar,” she tweeted. “Still not impressed but it doesn’t suck like everything else you do. ?”

Caroline also revealed that in addition to being homeless, she is also currently in debt. “In an effort to get my mother secure, I went into credit card debt,” she tweeted on Wednesday. “Two credit card companies are suing me, but I’ve [got] a very Jewish attorney handling it. (Suck it, @radar_online).” She added the hash tag #breakingnews and a poll asking: “Have You ever struggled financially?”

Soon after the homeless article was published, Radar Online shared another post about Caroline titled “Below Deck’s Caroline Bedol Admits Watching Show Triggered ‘Suicidal Thoughts’.” Although “suicidal thoughts” is in quotes in the headline, there are no quotes from Caroline in the article in which she actually says that. Here is most everything regarding the topic from the post:

Bedol, 34, revealed to Radar that she had thoughts of killing herself from the day she left the boat until “halfway through the airing of the season.”

“I was fighting alone,” Bedol said. “Once I got back I was really depressed. I was struggling.”

“I was saying, ‘Every episode, I feel like I am dying,'” she recalled.

She explained to Radar she never had a plan to harm herself. The third stew also revealed that “nobody” from the cast reached out to her after her departure.

In case you missed it, a Twitter user who was following Caroline expressed concerns that Caroline might be suicidal after some of her tweets back in December. That Twitter user even went so far as to tag Below Deck Season 6 charter guest Torrie Jasuwan and requesting that he reach out to Bravo. The concerns reportedly culminated in police visiting Caroline for a welfare check after a call was placed by a stranger.

Caroline addressed the topic again this week on Twitter:

BELOW DECK Kate Chastain’s book Lucky Charming is out now!