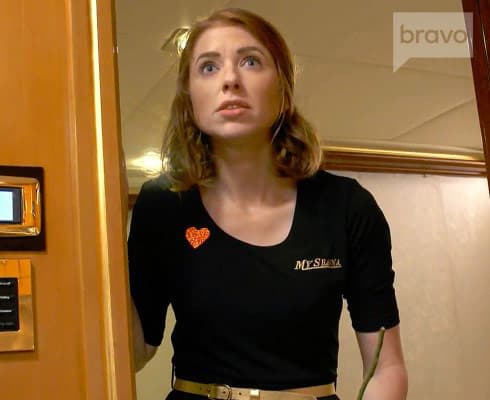 A dramatic departure from a Bravo reality series can often be a Golden Ticket when it comes time to film the show’s Reunion, but it appears that former Below Deck third stew Caroline Bedol will not be bringing any disgruntled drama to the Season 6 Reunion after calling out Kate Chastain and show producers on Twitter earlier this month.

Caroline revealed that she would not be appearing in the comments of her Instagram post sharing our Trojan horse meme inspired by her calling into Watch What Happens Live! as Suzie from Nebraska. One fan suggested that the call was taking things a bit far, and Caroline responded in her defense:

COMMENT: I do follow because I liked her on Below Deck, and I didn’t agree with how she was treated! But this is just crazy. We get it you called Bravo and acted like someone else. I’m still a fan of yours, you took more sh*t then I would have, but be the bigger person in the situation.

CAROLINE: I think you are forgetting (as we all do, as viewers) how much of the story is missing. The sh*t that they did to me was f**ked! You guys see them blast a stereo outside my cabin. I mean that sucks but it’s not enough. You know? It was sick what happened. And Bravo continued to silence my voice to protect Kate and Lee. Protect them. From lil [ol’] me? Let this speak volumes: I am officially not invited to the reunion. On the Med season, Adam and Wes had a physical altercation! They were both at the reunion. I’m the first BD crew member to not get an invitation. Tell me that is not a huge red flag?? Anyway, my point: don’t believe it all. And again, as a viewer, I do the exact same thing. I think it’s just natural to. Xx

In case you missed it, just before the episode in which Caroline quit, All About the Tea posted an article quoting a “ROCK solid” source who made some very startling claims about what transpired the day after Caroline put in her notice. After Caroline locked herself in her room, “Kate and Josiah banged on her door non-stop for about 15 minutes — demanding that she pack her bags and leave immediately. They then blasted techno music from boom-box speakers at Caroline’s door.”

Kate then reportedly yelled through the door that Caroline was actually quitting due to a “herpes outbreak,” and Josiah allegedly responded by stating: “Oh my God! Gross!”

More from All About the Tea:

Kate continued to berate Caroline: “You disgusting sl*t. You are f**king wh*re! We hate you. Everyone here hates you DISEASED SL*T.”

This will make your mom lose what is left of her mind,” Josiah was heard screaming.

Josiah’s alleged comment was in reference to Caroline’s mother, whose early onset dementia led to her being reported missing in 2013.

After the episode aired, Caroline went on a Twitter tirade in which she called Kate Chastain a psychopath and an alcoholic before also accusing show producers (including Andy Cohen) of being Kate’s “flying monkeys.” Caroline also expressed her disappointment in Captain Lee Rosbach for not defending her — which is reportedly why she called into last week’s Watch What Happens Live! After Show under another name. (Captain Lee was a guest on the episode.)

Caroline’s call would eventually be defused by Andy Cohen, and she later said she got so “geeked out” talking to him that she forgot to ask Captain Lee her question(s).

Caroline continued to be quite active on Twitter following the call, but her account is currently unavailable after there was a controversy over an alleged fake tweet she says she never made, and then she later got into it with several followers who were trying to reach out to people associated with the show to get Caroline psychological help.

I won’t bring up the alleged deleted tweet by Caroline because it is unclear if it is legit or fake. But, here are some excerpts from her other tweets responding to accusations that she may be suicidal, including a mention of Below Deck Season 6 charter guest Torrie Jasuwan: 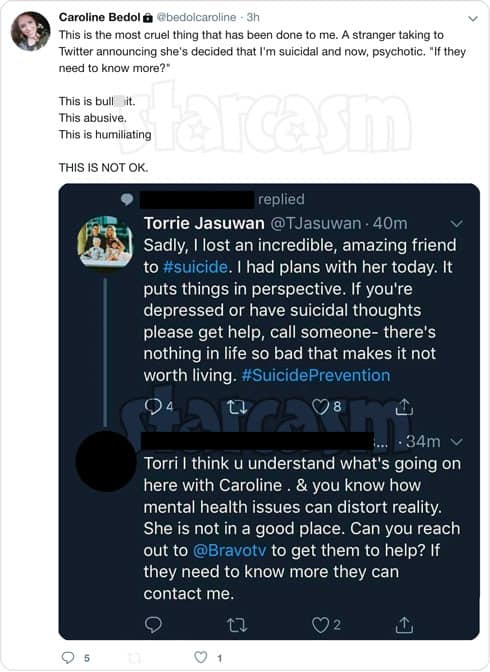 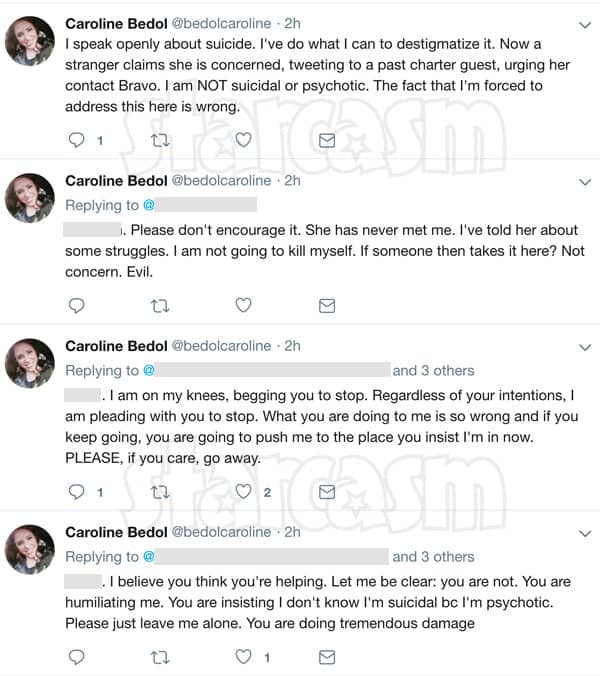 On a more positive note, Caroline tweeted some kind words of encouragement to her third stew replacement, Laura Betancourt. “Laura you are gorgeous,” Caroline tweeted, before offering up some advice on dealing with the haters on social media. “Also, the Twitter ‘mute’ button is pretty awesome. Jerks tire themselves not knowing that they no longer exist in your world. Xx”

So, are you disappointed that Caroline will apparently not be invited to the Below Deck Season 6 Reunion?

UPDATE – Well, right after we shared our post Caroline reactivated her Twitter account! “It’s because I get overwhelmed and deactivate it,” she explained to a follower who asked. “I work through whatever emotional unrest I have, then reactivate. I need to just put it on mute. Oops.” Well, welcome back Caroline!