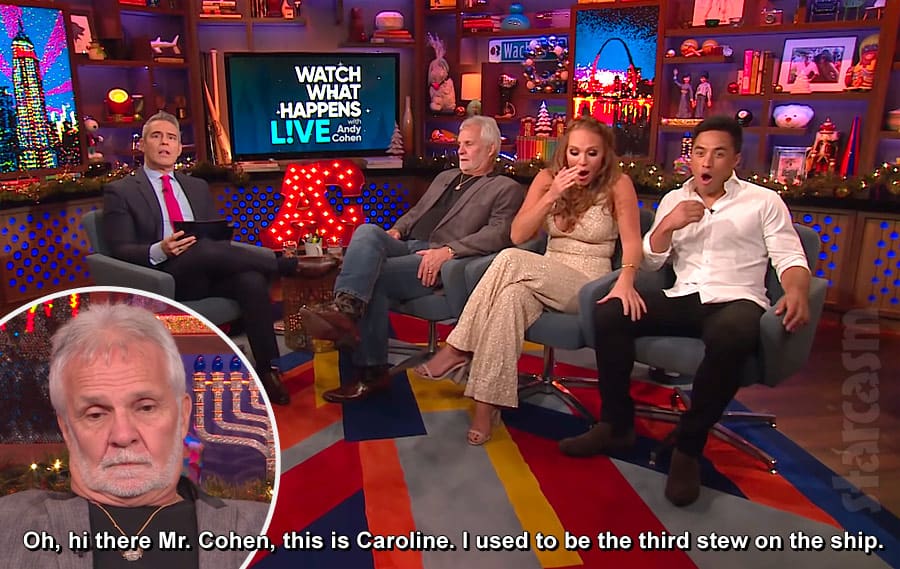 Just two days after former Below Deck third stew Caroline Bedol went on an EPIC 20-hour tweet-a-thon in which she called out her former boss Kate Chastain for being a “textbook psychopath with a drinking problem” and said Andy Cohen was just one of Kate’s “flying monkeys,” the 34-year-old called into Watch What Happens Live! — under the alias of Susie from Nebraska!

Caroline outs herself right away, and the reactions from Andy Cohen, Captain Lee Rosbach, Ross Inia, and Rhylee Gerber are priceless!

Here’s the full video — Susie from Nebraska calls in right around the 3:25 mark:

And for those of you unable to watch the clip for whatever reason, here is a full transcript of the conversation, complete with screen caps sprinkled in here and there:

CAROLINE: Oh, hi there Mr. Cohen, this is Caroline. I used to be the third stew on the ship. I’m really excited to talk to you because I’ve been trying to get a hold of you my bro!

CAROLINE: [at the same time as Andy’s greeting] My question’s for Captain Lee. How are you? 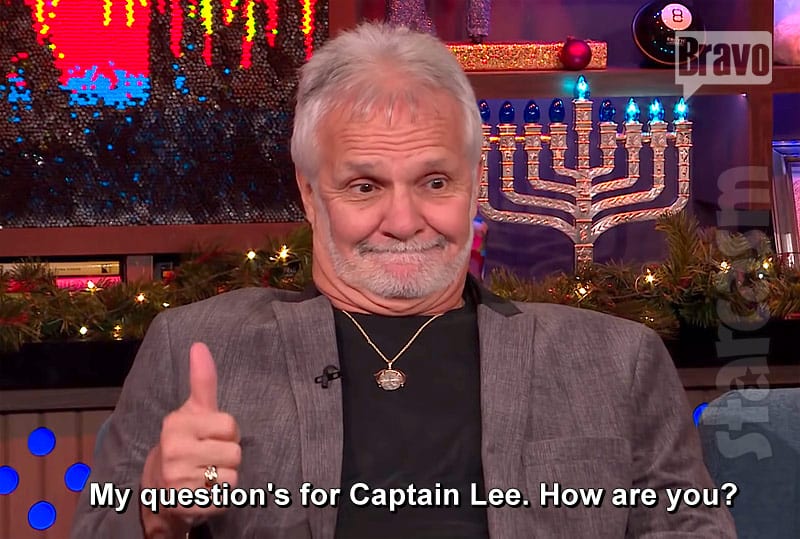 CAROLINE: Aw man, I, this is…Andy! I made a pipe out of shofar for you.

CAROLINE: If you ever decide to invite me on your show, helloooo?

ANDY: Carolyn – hey Carolyn, um, I, you know that you look just like —

ANDY: Do a lot of people tell you that?

CAROLINE: Yes! All the — constantly. And at first I didn’t see it, but I’ve been watching the show [inaudible]

ANDY: Did you see me ask Ellie Kemper if she had ever seen you, because I showed —

ANDY: I showed Ellie Kemper your picture when she was on because I wanted her to see that you guys are twins. Did you see that? 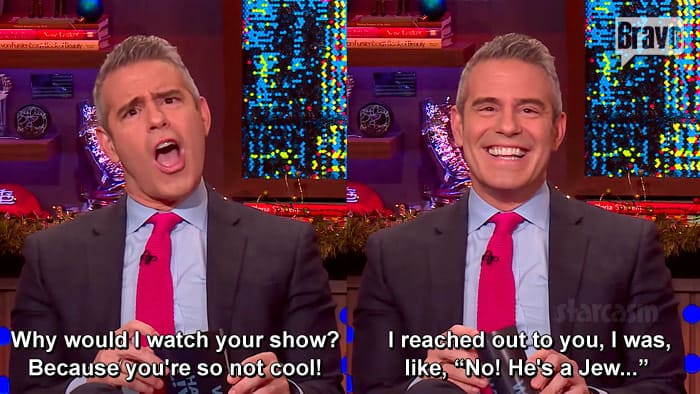 ANDY: That’s my favorite song too!

ANDY: We have a lot in common, except I’ve never worked on a boat. And I don’t look like Ellie Kemper.

CAROLINE: What was her reaction? I can’t even believe this. So tell me!

ANDY: Um, she loved it. She was, like, “Oh my god, I can’t believe it!” I’ll show you the clip. Anyway, Carolyn [not Caroline], I love you and I hope that I meet you soon? [To his other guests in the clubhouse] She’s very entertaining. I hope that she comes on the Reunion.

It was clear that Caroline was calling in with an agenda that she hoped to take up with Captain Lee, but smooth host Andy managed to step in and avert disaster. Caroline took to Twitter afterwards and explained a little bit about her intentions and how they got derailed.

And what about the Below Deck Reunion? Can we expect to see Caroline there since it seems clear that Andy wants it to happen? “I haven’t yet gotten an invitation,” Caroline revealed to a Twitter follower who suggested that Caroline might get some closure at the Reunion, “so we have to kinda, stay-tuned together.”

Is this the first time that a Bravo cast member has catfished his or her way onto Watch What Happens Live, not just being silly? Regardless, the moment was so great that I wanted to honor Caroline with her very own meme treatment: 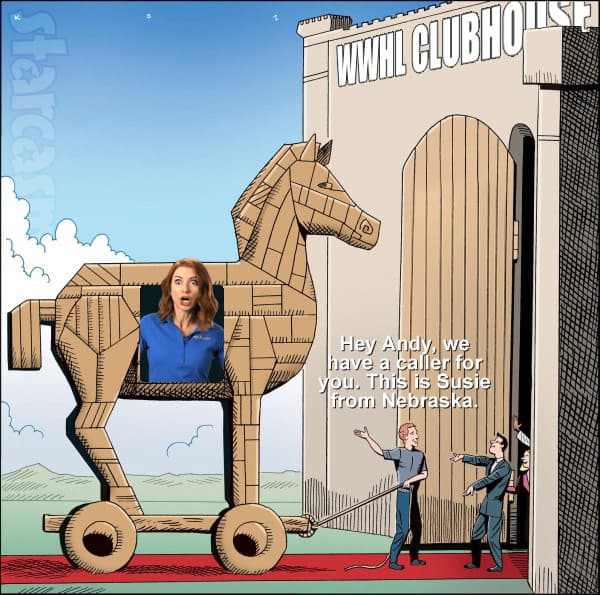 BELOW DECK MED Did you know Malia White is missing part of her finger?

BELOW DECK MED Where is Hannah Ferrier now? Why was she fired?