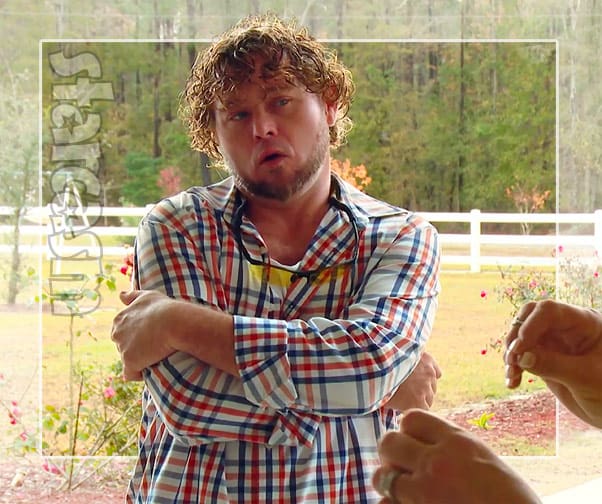 It would seem to be a nearly impossible challenge to try to steal the spotlight from 90 Day Fiance: Before the 90 Days’ 50-year-old loud ‘n’ raspy-voiced Southern elder Angela Deem. But that’s exactly what happened when Angela visited The Cotton Patch wedding venue in her hometown and was completely upstaged by her goat-roastin’ fellow Hazlehurstinite, DJ Doug!

Doug, who looked to have just popped out of the shower after only one hour of sleeping off a Friday night bonfire keg party, managed to inspire thousands of memes this past week with his memorable reactions to Angela’s questions about the venue potentially hosting her half-American, half-African wedding with fiance Michael.

Starcasm got in on the fun too as we shared our idea for a potential TLC spin-off series titled Say I Do To The Venue:

DJ Doug, who goes by Dougie Doug Wooten online, has embraced all of the attention he has been getting after his brief appearance on Before the 90 Days. That includes sharing a lot of the memes that have been created:

(Original poster @showtime_601 is a private account, here is the link to @shade.for.days’ repost)

(@showtime_601 once again. Here’s the link to @morebiggy’s repost)

In addition to sharing memes about himself, Doug has also been open to answering fan questions, and he was kind enough to take time out of his busy Cotton Patch schedule to answer a few for us!

STARCASM: What was your opinion of Angela, and how much were/are you dreading/looking forward to working with her on the wedding?

DJ. DOUG: To be honest she got on my nerves, she wants everything and wants it for free. And as far as the wedding, it got to the point I didn’t give a f**k either way.

STARCASM: Y’all live in a pretty small town, so what’s the general take on Angela from your fellow Hazlehurstinites?

DJ. DOUG: What the f**k is a Hazlehurstinites? We just country foke’s Black, White we all the same. This whole Angela sh*t don’t mean a thang…..

STARCASM: If you were DJ-ing Angela and Michael’s wedding, what are three songs that you think would be perfect for the occasion? (Whether you would actually play them or not.)

Alternate: Baha Men – “Who Let The Dogs Out” (lmao dj sense of humor)

STARCASM: As you are well aware, there is currently a lot of talk about you getting a TLC spin-off series. Is that something you would be willing to do?

DJ. DOUG: It doesn’t matter either way to me if it happens it happens. But I make a good living and I’m not begging to get on tv. But I’m me that won’t change. So probably not because tv foke’s try to change you into something you’re not. Unless it would be uncensored and I had say so in scripts.

STARCASM: I believe I saw that you are a rapper/singer? Is there anywhere that Dougie Doug fans can go online to hear some of your music?

DJ. DOUG: No. Music’s been put on hold, I’m focused on raising my daughter and working right now. My kids come first.

Still not enough DJ Doug for ya? We’ve got some more videos, including Doug firin’ up the greel to cook some poke chops! I should warn you that if your sin is foul language, DJ Doug will help you accommodate to it. (In other words, a couple of these videos have some bad language.)

Just a video from a month ago

Thanks to Doug for taking the time to talk with us! If you want to continue to foller along with his antics, you can use the Instagram and Facebook links above. He also promises a YouTube channel coming soon.