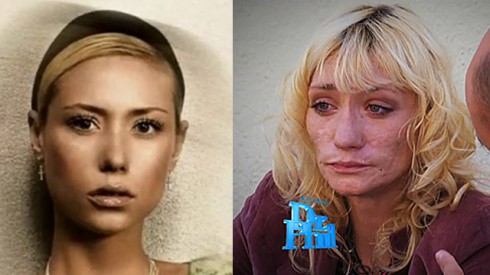 This story blows away all those “Faces of Meth” ads. Jael Strauss was on Cycle 8 of America’s Next Top Model a five years ago looking gorgeous, and now her face is ravaged by six-year meth, cocaine, and painkiller addiction (that’s right, she was using while on the show.) She unrecognizable now, and her family staged an intervention on Dr. Phil (which airs this morning.)

Another shocking fact? In her currently ravaged state, Jael is stripping to make money. 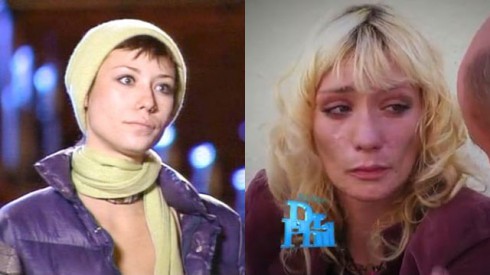 When Jael was on America’s Next Top Model, one of her friends died of a drug overdose, which was probably a huge indication of some of the things Jael was struggling with. On Dr. Phil her mom reveals that she used to do cocaine with her daughter and her friends to be close to Jael.

At one point after Jael was deep into her painkiller and (at the time) suspected meth addiction, her mom flew out to L.A. to check on her, finding dirty clothes stacked up to her shoulders, a broken shower, sores all over Jael’s face, and broken teeth. She made a paste out of cocaine that she rubbed on her teeth to kill the pain.

She’s stripping, living in a seedy motel, and just basically falling apart. She ran out of Dr. Phil’s show when she saw him, but he went outside to talk to her (for the first time ever in the history of his show.) He brought up something that happened when she was 10, implying that it was sexual abuse. She tried to tell her family at the time, but they wouldn’t believe her, and turned on her.

Cari Dee English, winner of Cycle 7 of ANTM, posted a long comment about Jael and the show in Gawker’s comment section. Basically she chastised the show for not taking care of their contestants, and not helping the winners figure out to do to make a successful career for themselves.

Here’s some of what she said:

Tyra won’t do anything. She provided a wonderful platform for girls to have a chance at their dream, but, after there is no “Tyra Mail”. I had to guide myself, and even though I won a model competition I still had no idea what the modeling BUSINESS was like. I had no idea what the industry was really like. I was famous, but no one wanted to take my picture. And critics and industry love to give us all shit for not being the next big supermodel.

Hopefully Jael will use this opportunity to turn her life around. Do you think Tyra and/or the show producers owe the girls on this show more than they give them? It really does seem to be a game show with the ruse that you’ll get something bigger than winning, when winning is really all you get. Even so, it’s not their fault when someone already struggling with addiction gets worse after being on the show.

90 Day Fiance’s Melanie and Devar to be on Dr. Phil after TLC blocks Jason and Cassia?