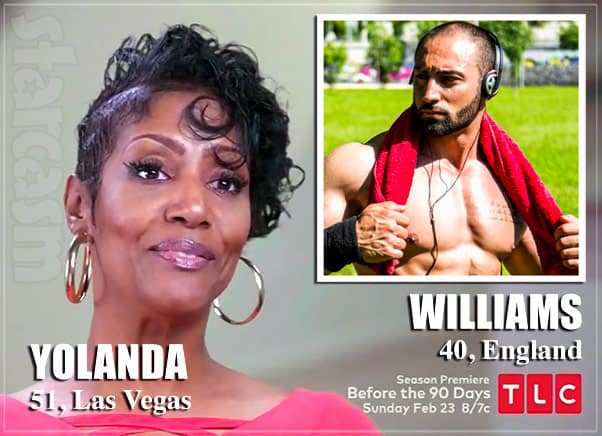 90 Day Fiance: Before the 90 Days is no stranger to teasing catfish story lines, and Season 4 is no exception. 51-year-old Yolanda is a widowed mother of six from Las Vegas. After the passing of her husband Dwayne, she lost 150 pounds and shared her weight loss journey on social media — and that’s when Williams slid into her DMs.

“My boyfriend Williams is from Manchester, England and he’s 40 years old,” Yolanda explains during her intro clip as viewers are treated to photos of a handsome tattooed muscular dude. “He’s a restaurant manager and he’s just simply gorgeous,” Yolanda continues. “Beautiful eyes, and oh — he got muscles everywhere.”

Yolanda says that she and Williams talk multiple times a day, but it’s only audio because of Williams’ phone issues. “He says the camera’s broken so he can see me but I can’t see him,” Yolanda reveals. “And he’s never sent me a video of his self.”

But who needs video when your man has sexy photos, is fluent in emoji, and has a sexy British accent? Well, two of those things at least.

In a preview clip shared by TLC this week, Yolanda fawns over Williams’ British accent as we are all treated to a phone conversation between the two. It seems obvious within seconds that Williams does not have a British accent at all, but sounds more like someone from Nigeria.

If viewers are willing to believe Yolanda is actually this gullible, she will certainly be the talk of the internet on Monday morning!

As mentioned, the 90 Day Fiance franchise has teased numerous catfish story lines before (Ricky and Melissa, Cortney and Antonio, Darcey and Jesse, Caesar and Maria), and it pretty much always turns out that the potential catfish is actually real. From our previous post just after Yolanda’s addition to the cast was announced:

They have featured catfish like Sumit, but usually only after the catfish revealed his or her true identity. (I’m still unsure if Marta’s Algerian man Daya was a catfish or not. We saw some low-res footage of her and Daya video chatting on the show, but she never actually made the trip, so it wasn’t really clear.)

So will Yolanda fly to Great Britain and actually meet the sexy stud in the photos? Thanks to the ever-diligent 90 Daytectives on social media, we have a definitive answer to that question.

The man in the photos being used by Williams is actually a well known Italian body builder named Michele Di Lucchio. Most all of the photos we are shown on the episode are stock photos from a photographer named Stefano Cavoretto who goes by Artofphoto on numerous stock photo sites.

You can click here to see the photo of Williams often used by TLC.

Is Yolanda being catfished by Williams? Absolutely! Unless Michele Di Lucchio is posing as a British restaurant manager with a fake accent.

The Fraudcast co-host @thehanekawa shared Williams’ connection to Michele on Instagram this week, and she took things one step further. “I contacted the photographer that owns these stock images and he informed me that — to the best of his knowledge — Michele doesn’t even know his pics have been used and are being shown globally for the purposes of the show.”

Just as @thehanekawa states in her post, the real question at this point isn’t whether or not Yolanda is being catfished (she is), but who is catfishing her? And will we actually get to meet the man catfishing her?

If I had to bet $20 then I would say that we will get to meet the man catfishing Yolanda, but probably via Skype or FaceTime and not in person. (I suppose he could be an immigrant living in Great Britain, but that just seems a little far fetched.) I just can’t imagine that producers would get viewers invested in this story line without some sort of payoff that is more than just Yolanda and her daughter being stood up in England. Plus, I think they have to get permission to use Williams’ voice on the episodes, so producers would have been in contact with him. Right?

UPDATE – We have found Yolanda’s Instagram and Facebook pages and now have additional details about Yolanda and Williams, including a timeline of their relationship and when she found out he wasn’t who he was pretending to be! Oh, and perhaps the real identity of Williams!

To find out what happens with Yolanda and “Williams,” be sure to tune in to new episodes of 90 Day Fiance: Before the 90 Days airing Sunday nights at 8/7c on TLC!