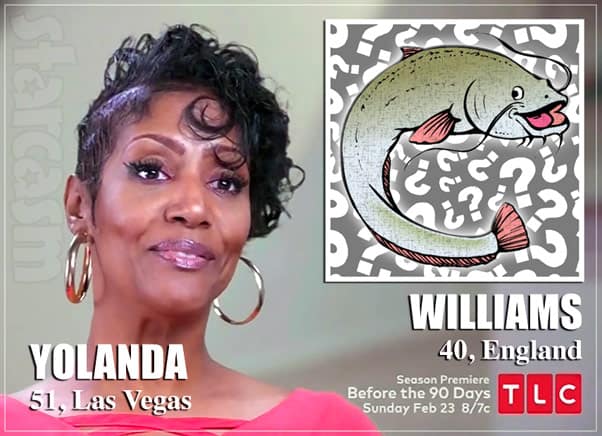 We are less than a month away from the brand new season of 90 Day Fiance: Before the 90 Days, and Sunday night TLC debuted a few teaser clips, including a new preview trailer with a brand new couple!

“I met someone online, and I’m in love,” Yolanda (seen in the photo above) says to the camera. Yolanda and her daughter are then shown looking at a laptop together as we hear her daughter’s voice narrating: “I’m just concerned that this guy is actually catfishing her.”

In addition to the new preview trailer, which is not available yet online, TLC also released the official bio for the couple. It reveals that Yolanda is 51 years old and from Las Vegas, Nevada. Her British boo (Darcey’s probably already jealous!) Williams is a 41-year-old restaurant manager. At least that’s what he says.

Yolanda is a widow who lost 150 pounds after her husband passed away. She shared her weight loss transformation online, and that’s how Williams first became aware of her. He slid into her DMs and the two hit off. They reportedly communicate every day, but Williams has the catfish detector buzzing because he claims “the camera on his cell phone is broken” and he is unable to video chat.

Unfortunately, we don’t have a photo (fake or not) for Williams yet.

As 90 Day Fiance fans are well aware, a little red flag isn’t going to stop an American in love from dropping some coin on a plane ticket! So, Yolanda prepares for her flight across the pond to meet Williams for the first time. Will she find what she expects, or will she be surprised with what she finds? Or will she even make it on the plane at all?

90 Day Fiance producers are no strangers to teasing catfish story lines, but to be honest, they rarely turn out to actually be catfish. They have featured catfish like Sumit, but usually only after the catfish revealed his or her true identity. (I’m still unsure if Marta’s Algerian man Daya was a catfish or not. We saw some low-res footage of her and Daya video chatting on the show, but she never actually made the trip, so it wasn’t really clear.)

Another interesting take away from the new preview trailer is that it featured controversial cast member Geoffrey Paschel and his Russian love interest Varya. Geoffrey has been making headlines (on our site initially, and later on The Daily Mail and other news outlets) because of the numerous abuse allegations that have been made against him by his current and former wives, as well as his recent ex girlfriend. One of his ex-wives even stated that Geoffrey “repeatedly raped” her in court documents.

Geoffrey is currently facing charges of aggravated kidnapping, domestic assault, interference with emergency call, and vandalism after an arrest in June of 2019 — shortly before he filmed for Before the 90 Days. His live-in girlfriend shared a harrowing account of what she says happened on the night of the attack in an order of protection filing. Here’s an excerpt:

When I got back to my house, I was attacked by Geoffrey Paschel. He repeatedly bashed/slammed my head into the hardwood floors of my home. He dragged me through the house by my hair and continued throwing my body into walls and furniture. (I know this because of blood on my walls, furniture, etc. Also, the couch was overturned and the kitchen table was moved several feet.) I screamed for him to stop multiple times. This went on for approximately 30 minutes.

After being placed under arrest, Geoffrey “attempted to kick out the windows of the patrol vehicle” and leg restraints had to be applied. Geoffrey then “made further attempts to damage the patrol vehicle while his legs were restrained” so he was removed from the vehicle and further restrained.

I want to iterate that this was from an incident in June. Geoffrey reportedly filmed for Before the 90 Days after his arrest.

I genuinely believed that TLC would be forced to remove Geoffrey from the show before the premiere, but the new commercial featuring him would seem to be a clear indication that the network is standing behind their decision to include him on the show. Of course, the addition of an eighth couple does give them a little more flexibility to cut him, so who knows?

To find out if TLC chooses to leave Geoffrey on the show, meet the six other couples, and catch up on Darcey and Tom for some reason, be sure to tune in to the 90 Day Fiance: Before the 90 Days Season 4 premiere on Sunday, February 23 at 8/7c on TLC!