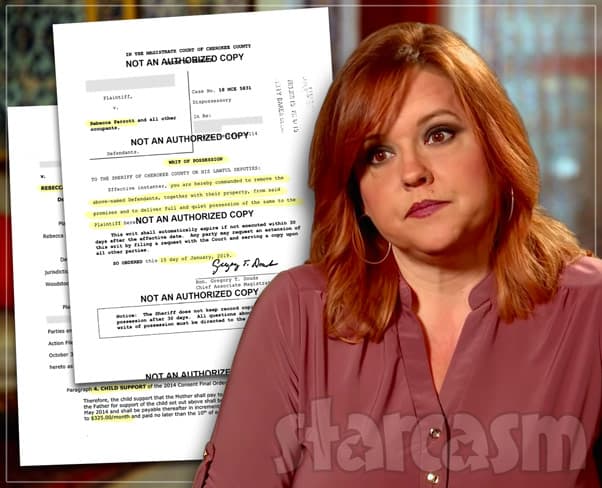 Just after the first preview trailer for the current season of 90 Day Fiance: Before the 90 Days was released, we shared a post with extensive details about star Rebecca Parrott’s marriage history — including the fact that she was still married at the time of our post. We also revealed that in 2014 Rebecca was ordered to pay $5,200 in back child support to her first husband, and father of her three children. While searching through court records, we also ran across a couple of eviction proceedings filed against Rebecca by the apartment complex where she had resided for six years.

Since our post, Rebecca’s first ex husband has filed a contempt motion against Rebecca for the child support that she still owes. Information about the open child support case as well as the eviction proceedings were recently shared on reddit, and there’s been quite a buzz about it among 90 Day Fiance fans online.

Rebecca, who has been very open about addressing criticism from fans this season, took to Instagram to respond with a video clip:

For those of you unable to watch Instagram videos, or just in case Rebecca deletes the clip, we’ve transcribed what Rebecca said:

Hey guys. So, I just want to address something that has been brought to my attention. I’m well aware of the recent developments about my personal life, and everything’s OK. Shocker! I have a personal life, and I’m not perfect. I’ve never pretended to have my crap together, and while everything isn’t exactly the way that it looks, you know, it’s also not great. But, it’s OK.

I so appreciate all of the people that support me and that worry about me, but I’m OK and everything’s gonna be fine. I signed up for this. Being on a reality show is not easy, but it is that: it’s a reality show. This is not scripted. I have a real life, and like I said, I’ve never pretended to have my stuff together. So, I just wanted to address that. Everything’s gonna be fine.

Rebecca iterated her video statement in her caption:

In response to the recent developments in my personal life. I understand I signed up for this. Shocker! I have a personal life. Lol I’ve never pretended to have my life together. I’m not perfect 🤷🏼‍♀️But I’m real. Thank you to all the amazing people who care about me and have reached out. I truly appreciate each of you. And to those who will feed on this, that’s okay too. I don’t blame you or have any ill-will towards you. It’s part of being on reality tv. ♥️ .

Rebecca’s ex husband filed the contempt motion on June 24. The motion cites the 2014 ruling ordering Rebecca to pay $5,200 in back child support, in addition to $325.00 a month going forward. The ongoing child support was for the couple’s youngest daughter, who had just turned 16 at the time. It’s unclear how much more unpaid child support Rebecca has accrued since 2014. If you calculate the amount based on when it began up through their youngest child’s 18th birthday, the amount would be $7,475.

In addition to the back child support, Rebecca’s ex is also asking for $3,000 to cover his legal expenses.

There is a hearing scheduled for October 4.

#90DayFiance #BeforeThe90Days star Rebecca Parrott is a single woman again! She divorced her younger Moroccan husband in July, so now she is free to try for a fourth time with her new Tunisian love Zied. #4thTimesACharm https://t.co/yvz24pFy4Y

As far as Rebecca’s eviction, that began late last year just prior to Rebecca moving out of the apartment complex she had lived in for years. Her landlord filed a dispossessory affidavit the week before Christmas on December 18. At the time, the landlord was asking for $1,900 in unpaid rent in addition to $31.67 for each day moving forward. There was also an additional $500+ in fees cited in the writ.

On December 28, Rebecca filed an answer in which she explained her side of what happened and requested a court date:

I am the defendant, I state the following reasons for requesting a court date. On December 11, 2018, I went to the management office and spoke with Jennifer, the Property Manager. I requested to know if a dispossessory writ had been filed against me. I was told no claim had been filed at that time, and she looked in my file on the computer. I asked her when she would like for me to move out, or if other arrangements could be made. I wanted to be certain that I was complying with the property’s demands. During this time, the property manager told me that even if the dispossessory was filed, I would have at least a month to leave the apartment. She asked when I would be leaving. I said my plan was to be out by December 29, 2018. At that time, Jennifer told me I would have until at least the first week of January.

I received the dispossessory claim against me on December 20, 2018. I immediately began making arrangements to be out. I packed everything up and then began moving on December 26, 2018 after work. Unfortunately, my storage place closed at 10:00pm that evening, without my being aware of this. (There is no signage to state this.) I had to return my belongings to my apartment. I again attempted to remove my belongings on December 27, 2018, and due to heavy rainfall, I was unable to finish, With record rainfall over the next several days, I am very worried about having enough time to complete my move.

It was never my intention to cause an issue with [apartment company]. I have been a tenant on this property for more than 6 years and always in good standing. The recent situation is due to my changing employment and having less income. I have tried working with [apartment company] over the last two months and they were always accommodating. However, recently I was told information that turned out to not be correct. I would like to request a court date to make an additional attempt to resolve this matter.

Rebecca got what she requested and a court date was scheduled for January 10. Unfortunately, Rebecca was a no show in court and the judge signed off on a default judgment against her. In addition to the Sheriff being ordered to kick Rebecca out and take possession of the property, Rebecca was ordered to pay $2,561 in unpaid rent in addition to $358 in fees and court costs. The amount that she owed would accrue interest at 8.5% per annum.

Rebecca mentions in her filing that she was a tenant with the apartment complex “for more than 6 years and always in good standing,” but that may not be entirely accurate. The same company filed a dispossessory writ in September of 2015 as well. Fortunately, that issue was resolved and the case was dismissed later the same month.

#90DayFiance #BeforeThe90Days Rebecca and Zied had an import business together?! Check out their bios from the deleted website for the Zuzo Import Company! #EXCLUSIVE https://t.co/vxB01lOymb

In summary, it sounds as though Rebecca was planning to move out of her apartment complex and there were some issues with her last couple months of rent and the move out date. That’s pretty much it. Rebecca wasn’t kicked out and homeless or anything dramatic like that. I’m uncertain what the timing was as far as her trip to Tunisia to see Zied, but it could be that she planned to put her stuff in storage during the trip before moving into a new place when she got back. That is purely speculation however.

That’s about it for this latest 90 Day Fiance “scandal!” Be sure to keep following Rebecca and Zied’s story with new episodes of 90 Day Fiance: Before the 90 Days airing Sunday nights at 8/7c on TLC!