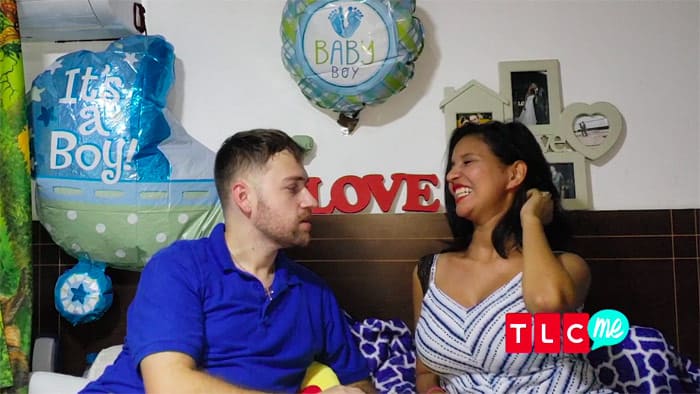 On the 90 Day Fiance: Before the 90 Days Couples Tell All special, Paul and Karine FINALLY confirmed that she is currently pregnant again — a joyful announcement that Paul quickly spoiled by revealing that he wants Karine to get a paternity test once the baby is born. Prior to putting a damper on things, Paul and Karine recorded a fun gender reveal video that TLC posted after the Tell All — plus Paul opens up about the third pregnancy after Karine’s two previous miscarriage as well as those leaked baby bump pics.

The gender reveal video was posted on TLCme.com, but unfortunately their embeds never seem to work. We have included a recap below, but you can click here to watch the clip!

Here’s a transcript of Paul and Karine’s announcement, which included Karine initially holding up a Brasil banner in the background:

PAUL: Hello everybody, me and Karine would like to make an announcement.

KARINE: I’m pregnant! [Karine makes the announcement in English before whipping out a pregnancy test and sonograms.]

PAUL: We’re happily expecting — a new pregnancy and it’s very healthy. Karine would like to make another announcement.

KARINE: I’m so happy. [She drops the Brasil banner to reveal a blue balloon that reads “Baby Boy.”] It’s a boy!

PAUL: We’re happily expecting a lovely baby boy. [In the] ultrasound, they didn’t see it at first. We went a few weeks later, then we saw the baby. So she was in denial. Until she saw the baby on the ultrasound, she was in denial that she was pregnant. All the pregnancy visits have been very healthy. The baby is extremely active. The baby’s just bouncing around, really hyper. I was really hoping for a baby boy because I want to make sure that my last name got carried on. We want black hair, blue eyes, and [to Karine] you want your [???] skin. We are working as a very happy unit. Communication’s better, language is better. I’ve still got a lot of work on Portuguese. Karine is doing very well with her English. So, we’ll definitely keep you posted.

Paul spoke with Cosmopolitan and confirmed that Karine had suffered another miscarriage in addition to the one documented on the show. “The miscarriages were something neither of us will ever forget,” Paul says. “It brought us even closer together as we put aside arguments and disagreements to comfort one another. It is a tragic life moment no one should have to endure.”

Doctors wanted the couple to wait six months before getting pregnant again, but Karine was pregnant again before six month had passed — which caused the couple extra concern over the health of the new baby. Thankfully, Karine is currently four months pregnant and, as Paul says in the TLC me video, the baby seems completely healthy.

In addition to talking about Karine’s current pregnancy, Paul also talked about the baby bump photos of Karine that were posted and quickly deleted back in June. “That was an accident,” Paul says. “I had a new phone. Karine was sharing photos with her family and the options were in English, and the social media options accidentally got selected. We quickly removed the photos, but apparently not quickly enough.”

Here is one of the photos: 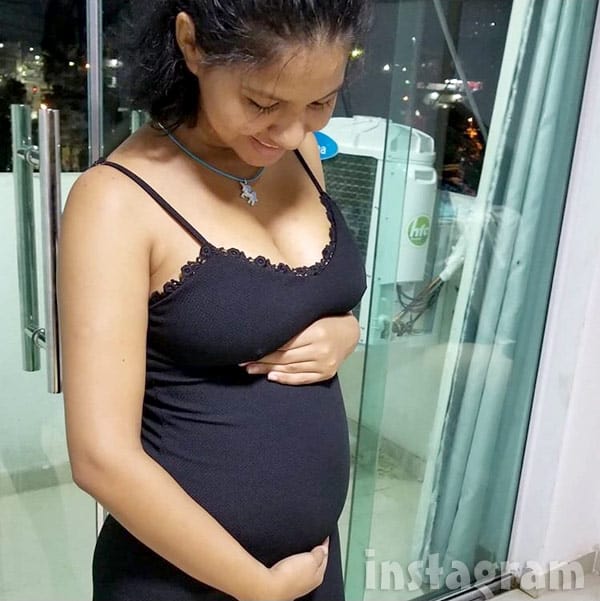 Karine is due in March, and if you do the math you will figure out that the baby bump photos posted in June must have been prior to one of Karine’s miscarriages, when I’m sure makes the fact that they were leaked that much more painful for the couple.

As far as whether or not Karine will be moving to the United States, Paul says “She wants to test out medical facilities and medicine in the U.S. to see which she prefers and which will be best for our child. Then she will decide which country is best.”

Hopefully we will all get to find out together when Paul and Karine return to TLC on one of the 90 Day Fiance shows!