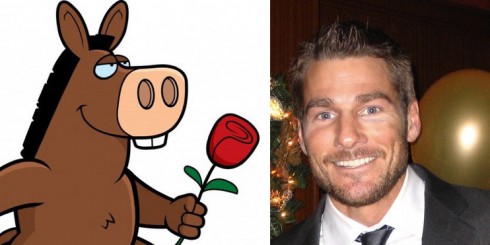 Our indecisive bartendin’ Bachelor hunk of love from Austin, TX has joined Twitter.  First off that horse with a rose cartoon is Brad Womack’s Twitter icon before you start asking.  I’m not sure what all this means in the long run but as far as the short term it apparently represents an opportunity to repeatedly assure folks (and perhaps himself) that he and Emily Maynard are fine.

Here’s what I’m talking about straight from the horse’s mouth so to tweet:

I’m satisfied with Brad’s position that he and Emily are fine or at least I’m satisfied that if you tweet dude and ask that’s what he’s going to say!

Emily is also on Twitter and she shouted out to Brad that if he watched the following fan made video compilation that it would make him cry:

It’s one thing to hear that everything is (Austin) hunky-dory from wafflin’ Brad Womack but when Emily backs up his words the sentiment gains some Twitter cred.  Here’s Emily welcoming B-dub to Twitter-space:

While there was some serious awkward turtle during the After the Rose ceremony, as far as these two’s tweets go all is looking on the up and up in the made-for-TV romance of Brad Womack and Emily Maynard.