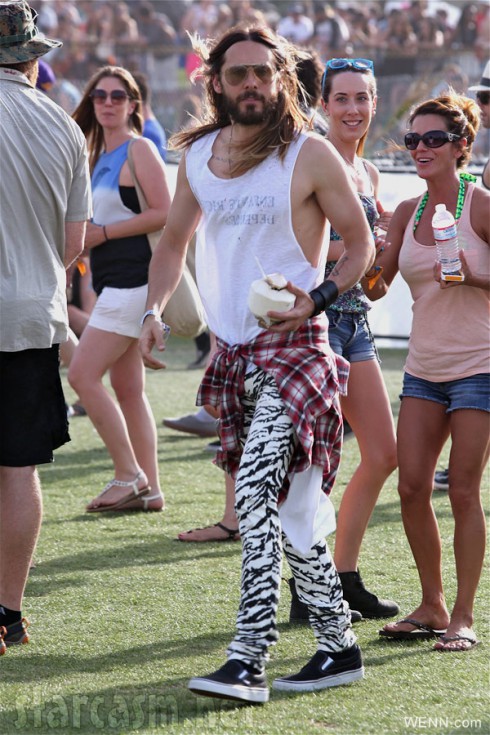 The celebrity summer fashion runway show known as Coachella enters its third day today with numerous A-Listers strutting their best millenial hippy duds for the selfierazzi as they enjoy the warm climate of Southern California scored by live performances from today’s hippest musical acts. Despite an impressive list of attendees that includes such names as Michelle Pfeiffer, Katy Perry, Aaron Paul, Zoe Kravitz, Vanessa Hudgens, Paris Hilton and Kendall and Kylie Jenner, none can compare to the trifecta pedigree of Jared Leto — the only human being to perform at Coachella (as the leader of 30 Seconds to Mars), win an Academy Award and pwn the lawn with an unrivaled festival fashion sense, as evidenced by his Jesus Lee Roth look from Day Two above and below.

In addition to his now all-too-familiar long hair and facial hair, the formerly rail-thin Jared was sporting a loose-fitting inside-out Enfants Riches Déprimés designer white tank, a pair of Van Halentastic black-and-white tiger stripe pants, a long-sleeved flannel shirt tied around the waist, some American Hustle shades and a pair of simple, comfortable two-tone sneakers. Oh, and to finish out the look, a refreshing bit of coconut water served in a coconut.

And just in case you missed it, here’s Jared Leto’s look from Day One of the Coachella Music Festival with his trending-topic-worthy tropical top:

Applications are now being accepted for the 2015 King of Coachella Festival Fashion. *Organizers of the pageant cannot guarantee Jared Leto will not be in attendance and will not issue refunds if he is.