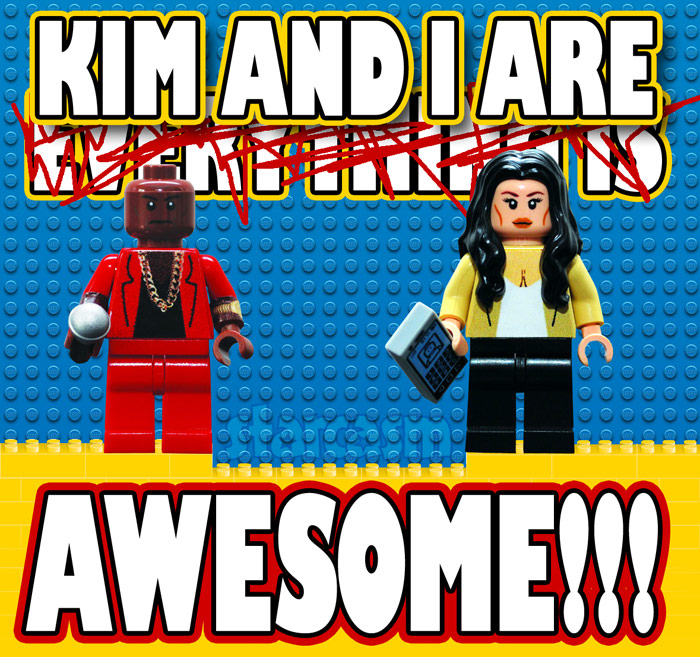 Less than 24 hours after Kanye West’s laptop was reportedly stolen in Paris a new song from Yeezus has leaked online! Titled “Awesome,” the song is all about Kanye’s wife Kim Kardashian. Oh, and of course, a little bit about himself.

You can pretty much guess what the lyrics are like, but I think the one that will be quoted most often over the next few days is the line hinting that Kim might want to look to emancipate herself from momager Kris Jenner. “You’re so awesome,” Kanye autocroons, “You don’t need to listen to your manager.”

And Yeezus becomes Woozus when he pitches this line to Kim: “I hope you’re ready for tonight. I’m gonna cook, you’ll be dessert.” Mmmmmmm… Kim brûlée.

Ah, but Kanye isn’t about to let anyone get all the awesome as he seems to say, “Yo Kanye, I’m really happy for you, Imma let you finish but…” when he adds the line, “Cause baby I’m awesome also.”

The song isn’t actually “new” per se, as Kanye reportedly performed it waaaaaaay back in May, 2013 at the Met Ball. Kim posted this photo on Instagram from the event and captioned it appropriately:

“Awesome” was also talked about and heard on Keeping Up With the Kardashians during a wedding scene:

In addition to the song not really being new, Kanye’s laptop was apparently not really stolen either. The theft was seemingly confirmed by Kanye collaborator Malik Yusef on Twitter:

We have the PRIVATE INVESTIGATION FIRMS ON TOP OF @kanyewest STOLEN LAPTOP!!!!!

But, Def Jam vice president Gabriel Tesoriero issued a statement today clearly saying that Kanye’s laptop was NOT stolen, and the timing of the “Awesome” song leak was purely a coincidence. “The stories circulating that Kanye West’s laptop has been stolen are completely false,” says Tesoriero. “His laptop has never been out of his possession. Hence, the laptop has not been hacked, and there has been no leak of personal data such as unreleased music, photographs, designs, videos or any other personal files. The leak today of the unreleased track “Awesome” was unrelated and completely coincidental.”

There is no word if Kanye plans to included “Awesome” on his upcoming album, believed to be titled So Help Me God.

(If you’re wondering where you can buy the Kanye West Lego figure and the Kim Kardashian Lego figure above, just click the links to buy them on eBay!)