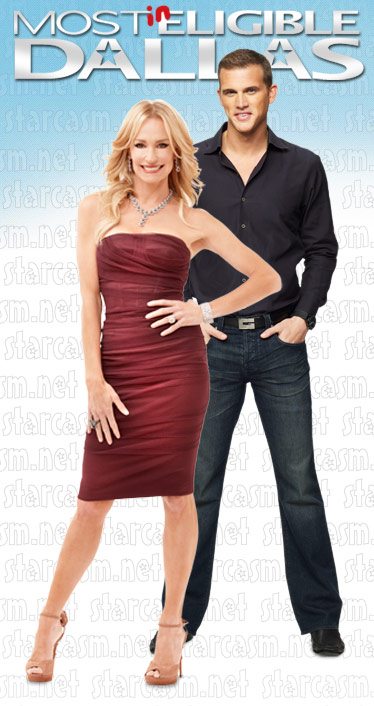 The world of reality TV gossip is once again focused on the city of Dallas as The Real Housewives of Beverly Hills star Taylor Armstrong was spotted at The Cattle Baron’s Ball with Most Eligible Dallas star Matt Nordgren.

Dallas super blogger Oh So Cynthia broke the story as she began getting reports via Twitter that Matt and Taylor were at the event together. She shared this photo of the two looking quite romantic: 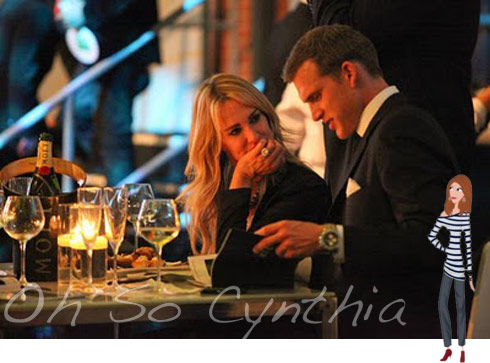 UPDATE – Oh So Cynthia corrected me and let me know the above photo was from Mei-Chun Jau, Special Contributor for the Dallas Morning News. Click the link for the original story.

Dallas television personality Ron Corning (Daybreak, Midday) was at the Ball and tweeted this firsthand account that seems to suggest Nordgren and Armstrong are a bit more than just friends:

Matt Nordgren appeared to be really enjoying himself at the Ball, something he later confirmed on Twitter:

The “Cloud 9” remark drew a response from Matt’s potential love interest on Most Eligible Dallas, Courtney Kerr, a comment Oh So Cynthia assures us is dripping with sarcasm:

It should be noted that the Most Eligible Dallas season finale is Monday night and the main storyline is whether or not Matt Nordgren and Courtney Kerr wind up together. Oh So Cynthia tells us she has an inside source who says Bravo leaves it up in the air, but judging by the actions of Nordgren over the last couple months, I think we can assume the two won’t be walking down the aisle any time soon. That theory is supported by the fact that Courtney Kerr was also at the Cattle Baron’s Ball, and according to Ron Corning, she was “nearby and appalled” by Matt and Taylor:

Oh So Cynthia received a call from Matt Nordgren about his evening out with Taylor and he continues to insist the two are just friends.

“Hey Cynthia. I am just calling to tell you that I am driving home from Cattle Barron’s. Alone!” Matt insists that he and Taylor are just friends and he is helping her through a rough time. Apparently, she “needs to talk about her problems and (Matt’s) a good listener”.

This marks the second time Taylor, who recently lost her estranged husband Russell Armstrong to suicide, has been spotted out on the town in the Big D with Nordgren, the last known occurrence being the weekend of September 23-24 during which Matt and Taylor were seen together at numerous events in Dallas. (CLICK HERE to read more about that weekend out, which includes reports of how the two first met.)

Matt Nordgren and Courtney Kerr will both be on Watch What Happens: Live! with Andy Cohen Monday night (just after the Most Eligible Dallas season finale) during which they are expected to address their relationship, but my guess is that Andy’s inbox will be blown up with Taylor Armstrong questions!

A couple people recognized Taylor Armstrong and asked to take pictures with her, which were of course found their way online. My favorite is from TakenAwayBlog.com‘s Brittney Aleman, who quoted Taylor’s infamous Oklahoma line from season one of The Real Housewives of Beverly Hills in her tweet: 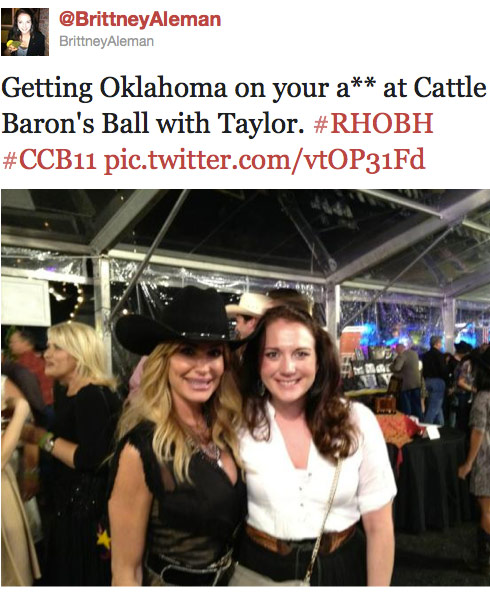 And here’s Taylor with Robin Means Skinner from Facebook: 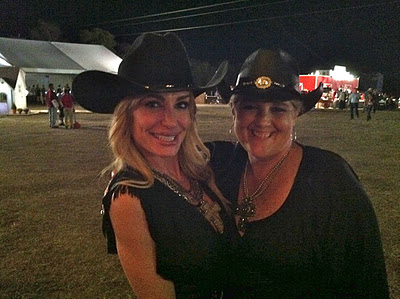 Yee haw y’all!!! Watch What Happens: Live! should be a blast!

UPDATE – Lawdy lawd! The fit has done hit the shan on this story! First off, Ron Corning has since told Oh So Cynthia that he didn’t personally see Matt Nordgren and Taylor Armstrong kissing, but he got it from “reliable sources.” Hmmmm… that sounds about as unreliable as it gets.

Secondly, Oh So Cynthia caught an earful from Matt Nordgren’s publicist, who provided her with a list of clarifications about the Cattle Baron’s Ball and Matt’s relationship with Taylor. Among the bullet points, which can be read in full HERE, Nordgren’s publicist says Taylor and Matt arrived at the event separately, Taylor was invited by the Ball months ago, and Matt denies having kissed Taylor. Also, they are giving an exclusive to OK! magazine tomorrow and are upset at the timing of the story – as if Oh So Cynthia or anyone else could have done anything about when Matt and Taylor were seen together at the Cattle Baron’s Ball!