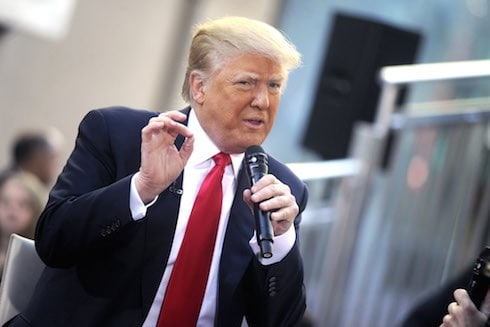 Just days after footage of Donald Trump describing sexual assault went public, a pair of television producers alleged “far worse” footage of the Republican presidential nominee. According to the producers–and several people who worked on the show–clips from his time as host of The Apprentice involve Trump dropping racial slurs and making female contestants cringe from lewd remarks.

Bill Pruitt, a former producer on the show, tweeted this weekend that there is Donald Trump The Apprentice hot mic footage “far worse” than what the public saw on the 2005 Access Hollywood tape:

As a producer on seasons 1 & 2 of #theapprentice I assure you: when it comes to the #trumptapes there are far worse. #justthebegininng

After Pruitt’s comment, Emmy Award-winning producer Chris Nee followed up by leveling a more specific allegation against Trump–namely, that he dropped an N-bomb during filming:

@mcuban the price is 5 million to cover the penalty fee. And we all get to hear him use the N word from what I hear https://t.co/IsmJvHHL1K

The “penalty fee” Nee refers to is apparently a clause in the contract of Apprentice producer Mark Burnett, who owns all rights to footage of the show. Nee tweeted at billionaire Dallas Mavericks owner Mark Cuban, an outspoken Trump critic, seemingly inviting Cuban to cover the $5 million penalty should someone leak an Apprentice video. (And, as Jezebel pointed out, Burnett is also the producer of Shark Tank, on which Cuban has appeared since 2012.)

Nee was also quick to say that she doesn’t know anything for sure, and to clarify that she never worked on The Apprentice:

Folks, I have never worked on The Apprentice. I don't know what's out there. Or what still exists. I've heard rumors. Would love to know.

I have only heard rumors. Never worked on The Apprentice.

The Apprentice-specific allegations follow an Associated Press report on Trump’s “lewd and sexist” behavior during his time as host of the show. “Eight former crew members,” the report claims, “recalled that he repeatedly made lewd comments about a camerawoman he said had a nice rear, comparing her beauty to that of his daughter, Ivanka.”

Another crew member, who was not identified in the report because of a non-disclosure agreement, recalled one instance when Trump talked with male contestants about wanting to sleep with a female contestant while the group stood in front of the female in question. “We were in the boardroom one time figuring out who to blame for the task, and he just stopped in the middle and pointed to someone and said, ‘You’d f*ck her, wouldn’t you? I’d f*ck her. C’mon, wouldn’t you?’ Everyone is trying to make him stop talking, and the woman is shrinking in her seat.”

The Trump campaign denied the allegations in the AP report. Apprentice creator Mark Burnett has not offered comment.